With I’m a Celebrity just days away from showing how celebrities deal with the Australian jungle, I was reminded of my own time living in Oz. 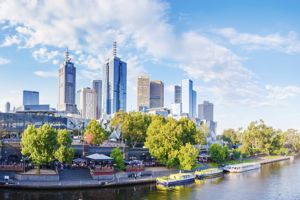 While I didn’t have to eat anything too unsavoury or spend my time covered in maggots, the whole experience was rather different than I’d expected.

I made the move quite a few years ago when I was married with a young child, and we were offered a chance to start a new life in Australia due to my husband’s job.

At the time he was a draughtsman for a company that made printing machines, which involved going on a couple of trips to Australia to oversee the installations and one of the companies he’d been involved with offered him the job.

We didn’t need long to think it over but at the time I was pregnant with my second child. As he had to start the job more or less straight away, I was left behind to sell the house and look after our two year old son.

A month before our daughter was due my husband came home and when she was three months old we all went over to start our new life in Melbourne.

For the first three months we were in a rented house paid for by the company while we tried to work out which would be the best area to buy our own place in.

We finally settled on an up-and-coming small town not far from the airport and about an hour’s drive from where my husband worked.

The house was gorgeous. In Melbourne most of the houses are massive bungalows – just like in Neighbours – and ours had three bedrooms, the master one having an en-suite and a walk-in wardrobe, with a lovely front garden, carport and huge back garden.

READ  Childhood dreams and the menopause

I knew about how harsh the Australian sun can be. I knew about the spiders and snakes and what to look out for, and I also knew that women were still seen as second-class citizens back then.

To be honest, I didn’t really believe the latter until I found out that I wasn’t actually allowed into two of the three pubs nearby. This wasn’t a huge problem, though, as we didn’t really go out in the evenings – Australians tend to entertain at home and it’s not the same now.

But what did become a problem for me was the insects. In Australia, if it walks, swims or flies it will have a go at you. And even if it’s not poisonous it will still have a bite.

So the lovely back garden was hardly ever used. Instead, we had a paddling pool on the decking as I wouldn’t take the risk of letting the kids play in the garden, partly due to the fact that every snake in that part was poisonous.

Every night I would spray around the outside doors with insect repellent hoping it would deter at least one of the eight-legged beasts from entering. Sometimes it worked, sometimes it didn’t.

When we’d been there two years we decided to come back. Although my husband had come to love living there, I just couldn’t settle.

It wasn’t for me, but I will say this.

Anyone who has the opportunity to do anything like that should grab it with both hands. This was just my own experience and I know enough people who’ve moved there and love it.

Australia is a fantastic place that offers a fabulous lifestyle and I don’t regret going. At least now I know and I’m glad I went then rather than years later wish I had.