Once upon a time a much younger and slightly braver version of me, together with buddy Sara, drove over the Pennines to an anonymous suburb of Manchester. 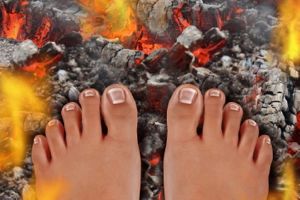 We had signed up for an “activity” with the Spice Adventure Group.

Having seen men firewalking in Fiji some years previously, I was keen to understand how it was done.

These days, I’m sure I could look it up on the internet. We didn’t have that luxury, or excuse, then! It seemed the only way to find out was to give it a go. So with our hearts heading mouthwards we parked up at a pub where the event was to take place.

What followed were lessons in firewalking, which seem equally applicable to life:

It’s good to take time out to prepare

To our surprise we were taken well away from the beer garden in which a huge fire had been built, into some kind of function room. Two hours of exercises followed, designed to give us the correct techniques and level of confidence – not too high, not too low – to face the fire.  It worked. I think every one of the 40 or so people in that room completed the challenge.

Not just the other way round. We spent some time standing with legs apart, hands on our hips, face upturned and grinning at the ceiling. It made us feel happier and more confident. I used this one at work before “tricky” meetings, though I did go into a toilet cubicle to do it!

It’s interesting that conquering fear can be about making yourself feel more emotional ready to tackle a situation, rather than ignoring the risks or being absurdly courageous. Do try it – in private.

Fuel is all-important. The fire would be at the same temperature as an oven, and it’s easy to get a burnt finger from touching a shelf. But that’s because metal is a good conductor. So once your digit absorbs the heat from the point it has touched, more instantly transfers to make things a whole lot worse. Wood is a poor conductor, so when we stepped on it our feet would “only” be exposed to heat from the near vicinity if we kept them moving.

Having said that, brightly glowing orange embers look a whole lot hotter than an oven…

Friends can stop you hesitating at the critical point 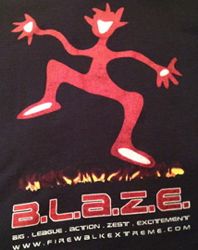 In this case our “friends” were burly men from the company B.L.A.Z.E. who ran the event. We lined up in pairs and carried out a much rehearsed procedure:

Me: “Nadine Waddington” (as was)

And we did, no arguments. Now I can see we had a kind of social contract. They’d promised if we did what they said we’d be ok, we’d promised to do as they said.

The correct pace is not necessarily “as fast as you can”

We’d been told to walk quickly, but not run. Running would push our feet down into the fire, and embers may end up on top of them. With an increased contact time, the skin would get burnt. If you are running there’s also a chance you’ll trip and fall… 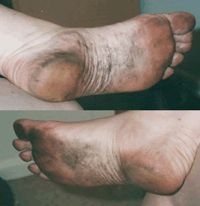 It took about seven steps. I’d taken four of them before my brain kicked in, by then the fastest way of getting off the fire was to carry on.

Cool, wet grass never felt as good. And then elation. We’d done it!

I had filthy feet, but only one tiny blister – you may be able to make it out on the sole of my right foot.

One fine specimen of a man decided that if we could do it, so could he. I guess alcohol increases self-assurance even more effectively than grinning at the ceiling. His shoes and socks were coming off… and then we realised why there were quite so many burly men around. Much as many of us would have liked to see him try, I guess there would have been insurance issues.

So would I recommend giving a walk on the warm side a go? Quite literally, “Hell yes”. We didn’t live happily ever after, but we have a good fiery tale to tell.