It’s that time of year again when the kids are off to university and parents all over the UK are getting ready to pack the car for the journey they’ve been anticipating and dreading in equal measure. 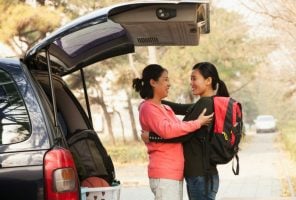 I have to admit – looking back three years later, I really wasn’t university ready. My daughter was going a year later than her friends from school because she’d decided to go into graphic design and needed a portfolio. Even though we had the extra year together I couldn’t help but dread it as the day grew ever nearer.

That said, I threw myself into all the planning and preparation with forced enthusiasm and spent the summer getting everything together – pots, pans, cutlery, bedding (the list really is surprisingly endless) – and consoled myself with the thought that she was not too far away.

The day finally came all too quickly. We were going on ‘that’ journey together and I would be leaving – alone. And truly alone I was. Her father and I had divorced when she was two years old and he had made the decision not to be involved in her life. I had brought her up, supported her, revelled in her personal triumphs and now the time had come to let her go, no one was there to support me.

The time had come to let her stand alone

She was excited about this new stage of her life and I wasn’t about to moan and groan about being left behind because I didn’t want her to have to worry about how I was feeling, tarnishing her experience. I was genuinely excited for her but it was bittersweet; sorrow at having to let my child go but also pride because I’d raised her to be independent, to live without me – to stand alone.

This is what being a parent is all about, nurturing your child in a supportive loving environment so that eventually they feel strong enough to embark upon their own adventure without you. It’s what I’d planned all along, it was inevitable, but that didn’t make it less painful.

Case by case, box by box I let my daughter go. As we emptied the car and filled her new room the transition was complete. I stayed for a while to help her get the room straight but I could see she wanted to meet the other students, make friends and stretch her wings. I hugged my little girl for the last time, told her I loved her and left her all alone with strangers; it reminded me of the first time I left her at nursery all those years before.

Surprisingly I was fine – no tears, nothing. I’d decided I wasn’t going to be one of those mothers who collapses into paroxysms of tears and snot in front of everyone. If I was going to break down it would be back in the safety of my car.

But my tears of loss didn’t come, wouldn’t come and so I just carried on with things.

Several weeks later, I needed stationery and so I took myself off to Staples. Before going to university my daughter had worked there. I spoke to a couple of her old colleagues who asked me how she was settling in and told them she was fine, having the time of her life in fact.

Without warning and without trigger I felt absolutely bereft. Whenever I’d visited in the past my daughter had served me and now she wasn’t there. I felt an immediate urge to get out of the shop and ran to the car. I sat with my head and arms leaning across the steering wheel crying my heart out. A tsunami of emotion consumed me without warning, I’d spent the previous weeks thinking I’d coped so well and had come to terms with the new order of things. It was only after this outburst I started to move forward – even though I thought I already had!

It’s a difficult transition for everyone, the child leaving and the parents left behind. Be proud of yourself for doing such a good job. Your child is going to be standing on their own two feet and that is down to you.

Letting go is part of parenting, it’s unavoidable from day one; the destination we as parents are all driving towards. The route may not be straightforward and the road may have potholes along the way so if you are preparing for ‘that’ journey, whether it’s near or far congratulate yourself on a job well done.

By the time three years have passed and you’ve become accustomed to the status quo, they’ll have graduated and returned home bringing a whole host of new problems for you to deal with!