How can you respond confidently when someone makes a request you’d prefer not to accommodate? 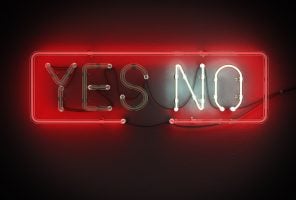 The question has just been posed. Pause. Was your inclination to say yes, even though there’s a voice deep down saying no?

What possible reasons could there be for saying no?

– It’s beyond your means?

– It’s beyond your comfort level

– You have no interest?

Identify all the reasons you have for saying “no.” Identify which stem from a lack of confidence, versus a sincere disinterest in fulfilling the request.

What would happen if you said yes? Perhaps:

Saying “no” is hard for many of us.

Guilt often comes into play. Whether this guilt has its foundation in religion, your upbringing, or a worldview that simply says “it’s not nice to say no”, we often recognise it and make decisions we’d rather not be making, based upon it.

You’ve made the decision, after scientifically weighing the results of your cost/benefit analysis, to honestly say “NO”. Well, go ahead and say it clearly, and self-assuredly.….in the mirror. Look yourself in the eye, and do it.

Say it like you really mean it, and then say it again as you would to whomever made the request of you. When you pretend you’re speaking to the person who made the request, does it come out differently? Practise and experiment with different ways to say “NO” until you find one you’re comfortable with.

See also  Why is menopause making me self conscious?

If you’re used to giving in to others, then guess what? After all that practice, you may just be surprised to find that they are not willing to accept it! They may push, rephrase the question, or make a new, not altogether different, request.

Know your boundary—what ARE you willing to do? Revisit the questions you asked yourself before. If you are serious about saying “NO” then stick to your guns.

Tell the individual making the request that you would appreciate it if they respected your wishes, and ask them to refrain from pursuing it further. If you are comfortable expressing your “reasons why” then do so speaking from your personal perspective.

If you are going to say NO, you must say it in a way that means NO! In a firm, yet polite voice.

Also, if you want to say the reasons why, keep it short and sweet. When saying NO remember the power of non-verbal communications. Look the person in the eye when you say the NO. Shake your head at the same time as saying NO. Stand up tall. Use a firm tone in your voice.

Remember, no is a complete sentence.

Don’t forget that when anyone asks a question of you, you are perfectly OK to say, “Can I think about that and get back to you”. No-one should be pressurised into giving an immediate answer. It will give you some time to think it through and to gather your thoughts. It will also give you some time to think about how you are going to say it, the words to use and your body language.

Practice makes perfect as they say!

What I would like you to do for the next 7 days is to start to say NO more often. You will be an expert come the end of the week!