Home / Happiness / Relationships / Stereotypes: should we judge a book by its cover?

Are you guilty of ‘labelling’ people too soon? I decided to take a counselling course a couple of years ago at a local FE college. On the first day we all introduced ourselves to the group and took part in team games, which helped those who were nervous to relax.

On that day I found myself looking around the room and labelling each person based on the ‘type’ of person I thought they were. I was very judgemental, labelling and boxing each individual. That was that – job done!

The following week we were put into ‘home groups’ of about five people to build relationships with and give help and support to. I was horrified to find myself in a group with what I had labelled ‘dysfunctional’ people – this wasn’t in the course spec when I signed up!

There was the alcoholic, the drug addict, the woman with a hundred kids from a million men, the hairdresser who was continually ruled by her heart and emotions, allowing herself to be used and abused by the men she fell in and out of love with, and finally the damaged, explosive, violently abused wife. And there was me!

What on earth was I going to do? I had no desire whatsoever to engage with these people, but worst of all we were supposed to give out our personal details, mobile phone numbers, email addresses and home addresses…

I wondered what on earth people like this could do to help others. In fact, they were there because they know what it is like to go to hell and back. Because of this, they can make a difference to someone else’s life.

See also  Autism: A moment in their shoes

Week after week I endured listening to their anger, frustrations, moans, groans, the predicaments they found themselves in, their hopelessness at their situations, their brokenness and sadness at having lost everything but not being able to make it better.

I felt sad for them. Not a heartfelt compassion, not really sympathy, just sad. I was cold. Not nice and not a decent response from someone who calls themselves a Christian.

I pitied them, if I am honest, which is just awful. I became superior – they viewed me and my life as just perfect. They couldn’t relate to me, nor I to them. 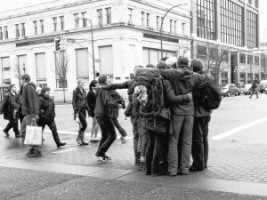 One day I walked into college in a distressed state. I was upset about some personal difficulties at work, and my daughter was distressed as she had moved from home and was finding it hard.

They weren’t huge issues really, I was just finding it difficult to cope with them. I heard myself sharing this with the small home group, which totally went against my principles of exposing my weakness. They all listened to me very intently. It was quite scary – pure silence!

I cried, which made me feel even more stupid. They watched, they listened. Silence again, deafening silence! Then something quite simply amazing happened. One by one, they reached out to me with compassion, spoke clumsy words of love and care; they could relate to me.

I was overwhelmed, amazed that they would wish to reach out to someone like me who had judged them for what I had seen and not loved them for who they were.

I discovered that, by sharing my hopelessness at not being able to cope, love was released and it opened a door so that they could meet me half way.

See also  The new child arrangements orders: what are the changes?

Through openness and honesty and revealing my weakness, a bridge could be built over all the scariness of life – an access point had been created unwittingly through vulnerability where we could all walk together and admire the view! Not much may have changed in circumstances, but we were all equal.

These five lovely broken individuals taught me a huge lesson in such a kind way – never judge a book by its cover, because a rough diamond is generally a real diamond needing a little polish to bring out its beauty.

I learned not to be proud but to be humble – I was no better than anyone else. A verse in the bible came to life for me, and I understood for the first time what it meant. James 4:6, God opposes the proud, but gives grace to the humble.

Grace had met me in its purest form: humanity!