Your elderly relative may have an overactive thyroid… 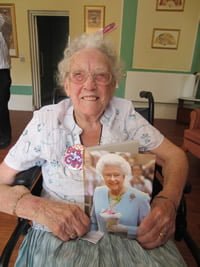 My Grandma was 100 years a couple of weeks ago.  We had a wonderful celebration with cake, flowers, a knees up in the home, and of course THAT card from THE Queen. Yet just a month or so earlier, it looked like either she wouldn’t make it, or if she did then she certainly wouldn’t want to celebrate.

After living ninety-nine and a half years with an incredible joie de vivre, Grandma suddenly reported she was “down”. She lost her interest in the fortunes of Hull City – rather a shame because in getting to the FA Cup Final they did rather better than they ever had before in her lifetime. She no longer wanted to see her hairdresser for her weekly do and gossip. She no longer loved the DVDs of André Rieu. (Who, by the way, was too important to send her a 100th birthday card. I’m not such a fan.)

Living 90 miles away, I heard most of it through my upset and frustrated father. But on one of our visits she declared “you shan’t be seeing me again, so goodbye”.

Several things were tried, such as taking her off the beta-blockers she’d been prescribed for a very minor heart complaint. A first set of blood tests found nothing. A second set was tried.

The news came back that she might have an overactive thyroid. 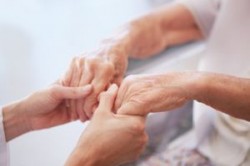 It took three and a half weeks for Grandma to see the hospital consultant. During this time she thought she was going mad, but couldn’t get to see a Community Psychiatric Nurse. It transpires that they won’t see a patient with an overactive thyroid as this is a common symptom. Instead she expressed a wish to die many times, and agreed to move from her flat into a home, something she’d been set against for many years.

See also  Making our homes accessible to all…

Medication was prescribed with the sensible warning that it might take four weeks to kick-in. We visited Grandma just a few days after she began taking it. Although there were a few grumbles about it not improving her eyesight, she seemed delighted to see me. And chat like her old self – apparently they sometimes get crumble and custard in the home!

Since then we’ve heard similar tales of “complete personality changes” in older folk, due to overactive thyroids. And identical reversions to “their old selves” upon popping the pills.

Fortunately, my Dad found a terrific care home in a short space of time, staffed by a delightful team who cared for Grandma in her darkest moods. But she could easily be regretting the decision to leave her flat, and dispose of most of her possessions, due to a couple of months of illness.

If you remember this tale and spot the signs in someone you love, I’d urge you to suggest to their doctor that it could be an overactive thyroid. It could make the world of difference to them and their next birthday party.