Home / Time off / Interests / The Joys of Walking

An enthusiast reminds us of the joys of walking 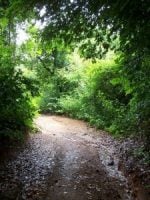 Rory Stewart is my kind of guy. He truly knows the joys of walking, and believes that to experience any place properly, you have to walk it. In his book “The Places in Between” he contemplates walking through Iran, Pakistan, Nepal, India and “…a magic in leaving a line of footprints stretching across Asia”.

He recalls “…evolutionary historians who argued that walking was a central part of what it meant to be human. Our two-legged motion was what first differentiated us from the apes. It freed our hands for tools and carried us on the long marches out of Africa. As a species, we colonized the world on foot. Most of human history was created through contacts conducted at walking pace, even when some rode horses. I thought of the pilgrimages to Compostela in Spain; to Mecca; to the source of the Ganges; and of wandering dervishes, sadhus; and friars who approached God on foot. The Buddha meditated by walking and Wordsworth composed sonnets while striding beside the lakes.”

And he then set off to walk across Afghanistan in 2002, when the country was a war zone. He planned to walk over the very poor, isolated northern area…… in mid-winter. I recall that at one point, he was picked up by American soldiers, being too ill to continue his surreal walk. On recovering, he returned to the point at which he was picked up, so that he could walk over the area which he had previously journeyed by truck.

I completely understand him … although he has truly and squarely beaten me at my own game.

Since an early age, the joys of walking have grabbed me. Mine was the longest paper round in the area – very few papers, delivered over an inhospitable and rugged rural area (see “Last Tango in Halifax” for a flavour of the terrain). As a teenager, on Christmas post duties, having delivered a sole card to a far-flung farm, I refused a lift back to Holywell Green Post Office, preferring to walk.

I love being able to BREATHE and to smell the earth! Not applicable to London…..

I love the delicious companionship of walking with a group, the wide variety of people one meets when joining the walking festivals which have sprung up of late.

But I also love the space to think, which you get when walking alone. And the warmth of a passing greeting from a stranger going in the other direction, offered on an otherwise silent trek.

Oh, the endless pleasures offered by observations made when walking around London at all hours of the day and night. A recent trip saw us take the bus from our hotel in Chiswick to Canada Water, just to walk back to the hotel, taking in whatever we wanted on the way. As both of us have lived and worked in London for the greater part of our lives (and are now country dwellers in Herefordshire), we became ghosts, floating invisibly over the paths of our former selves. I stood melancholy, adjacent to the site of the block at London Bridge containing my former office (in the dark ages of 2001) …demolished to make way for The Shard.

Walking the stations is a new hobby, with St Pancras International my favourite. In the early evening of a sparsely populated station, an anonymous piano player brought tears of delight. “The Lovers” and their plinth brought me to a standstill, as did Sir John Betjeman. We had as much time to gaze as we required, because we were walking, and there was no agenda and no timetable.

Probably my favourite walk (except for the boggy bits): Marsden Moor (near Huddersfield), where standing at (clinging to!) the trig point, mercilessly battered by horizontal sleet and gales, we spied a bent line of black shuffling towards us from the obscured and bleak horizon. Eventually the line reached our trig point and we shouted “Ahoy! Who goes there?” From out of the huddle came the cheery reply, “’tis the Rochdale Ramblers!” They also know how to enjoy themselves!