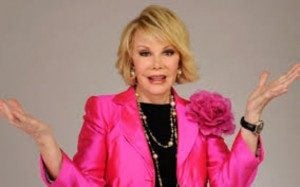 When I first heard the news about Joan Rivers, my thought was this can’t be really happening.  She was like your favourite aunt, someone you expected to always be there, offering sound, sage and sometimes completely outrageous counsel.

She can’t be gone. No one else does what she does.  No one.

I saw Joan Rivers for the first time in a small comedy club somewhere in New York City during the summer of 1986.  My brother was already in love with this brassy, ballsy woman and he sneaked an underage me into the venue to witness it for myself.

I had never seen anyone, let alone a woman, act with such frankness in public.  A heckler in the front row tried to best her by telling her how a lady should act.  He lost, miserably.  She called after him as he was leaving the club and let fly a slew of perfectly hysterical expletives that followed in his wake.  Someone near the front jeered.
Rivers just replied “Oh, Grow Up!” She had said what everyone one of us in the room was thinking but had been afraid to utter.  Then again, this is Joan Rivers we’re talking about.

Joan Rivers went ‘screaming through life’ with designer aplomb.  She shattered glass ceilings while in 4 inch 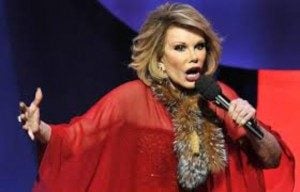 heels.  She was the first woman to have her own late night talk show, and the acquisition demolished her longtime friendship with the Tonight Show’s, Johnny Carson.  Her success as a comedienne was overshadowed by her success as a woman, something Carson never got over. “He didn’t like that as a woman, I went up against him.”

She chose to engage ageing publically and underwent cosmetic surgery; then brought the surgical procedures into her act.
“I’ve had so much plastic surgery, when I die, they will donate my body to Tupperware.”

She worked, constantly.  Last night I caught a broadcast of the documentary “A Piece of Work”.  At one point Rivers is asked to define fear.  She holds up an appointment calendar, its blocks of dates empty, white, barren.  “This is fear” she says, pointing to the absence of bookings.

Be it fear, or an insatiable hunger to keep busy, she worked – constantly.  She did a show the night before her cardiac arrest, and had a show booked for the night after.  Newton’s First Law of Motion states that a body in motion, remains in motion.  And remain in motion she did, right up to the last moments.

“Don’t worry about the money. Love the process. Don’t settle.
Don’t ever underestimate your audience. They can tell when it isn’t true.
Ignore your competition. Don’t worry about how others are doing.”

That’s how I get through life. Life is SO difficult – everybody’s been through something! But you laugh at it, it becomes smaller.