Home / Time off / Culture / Iris: A night at the cinema

“If only Hereford had a better cinema,” bemoaned my husband with a heavy heart and not for the first time. Being a Londoner he grew up on takeaway kebabs and going to the cinema whereas for me the first was unheard of and the second such a rare treat that I can remember each and every childhood visit.

Since meeting me he has, in that inevitable decline in ambition and verve on the path to a compromise between opposites, cut his film going extensively, yet he still hankers after it. One of the problems for him now is that the Hereford Odeon has not provided much inducement with its one screen and traditional seating.

We have of course been to the cinema together since our move here…once. The evening was not an unmitigated success. Normally when we see films together we watch a very unfunny romantic comedy as a middle road between the all action movie where blood and noise abound and the all in the mind drama where facial expression is everything.

On this occasion Marc makes the ultimate sacrifice and agrees to come with me to watch Iris, the moving story of Iris Murdoch’s slow descent into Alzheimer’s disease. The subject matter was made more poignant for me by the fact that, some years before, my parents had seen Iris Murdoch talk at The Hay Literary Festival, where she was embarrassingly unable to hold a conversation together and kept stuttering over her responses.

The audience was angry at having its time and money wasted. No one knew then that her personal public nightmare was just beginning.

Iris was never going to be a blockbuster of a film, but in Hereford it attracted on our chosen rain swept miserable night a mere handful of viewers, principally middle-aged peri-menopausal women like me. Most are alone. 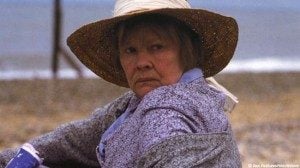 The small number of viewers does not trouble me, as this is a film I really want to see. I am engrossed from the outset and even Marc, crunching on minstrels and rustling through popcorn and then absent-mindedly nudging me to offer me some, fails to distract me from the task in hand. I am emotionally engaged and enjoying myself.

When the older Iris (Judi Dench) is on the beach vacantly playing with sand I start to sob uncontrollably. I am not out of place as sobs and sniffs and blowing of noses echo across the auditorium as every woman there is overwhelmed by the awful bleakness of the human condition.

I reach for Marc’s hand seeking his sympathetic reassurance that all is fine really and am happy in the knowledge that we have at last found a film that moves the both of us.

I cannot find his hand in the darkness and so look across to find that he is reclined comfortably, mouth open and eyes closed, the bag of popcorn tipped on its side. I am prepared to give him the benefit of the doubt and believe that he is dead but the gentle snoring tells the awful truth. He is fast asleep.

I am, for want of a better word, gob-smacked. We have reached the climax of the film, a film that should have renewed the bond between us and revitalised daily conversation, and my husband is asleep.

Disgusted, I turn back to the screen. Thank goodness there are so few others here to witness this crassness, I think to myself. We are silent on the journey home and the noise of the windscreen wipers deafens until I round on him.

“How could you fall asleep?” I demand.

“Well in my opinion the film was at least half an hour too long” he says calmly, refreshed by his recent slumber. The fact that he had fallen asleep well before his preferred finishing time seems to have escaped him.

“What do you mean too long?” I screech incredulously. “That was the point of it.”

For the second time that evening I start sobbing. We each vow silently to ourselves that we will never accompany each other to the cinema again or at least until a multiplex makes it to Hereford…