Jean Rogers, Vice President of Equity, tells us about the campaign to get women over 40 back onto our screens 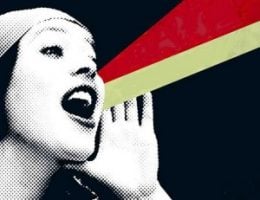 As an actress I trained for my profession believing I would portray women, even when old, so long as my ability to remember my lines was unimpaired. Then I hit fifty and everything changed. My story is not unusual.

Dame Harriet Walter, an accomplished and celebrated actress, wrote recently: ‘It’s not about us.’ She was referring to the invisibility of the older woman, not just regarding our image but also our lives, because the media in general does tell a story, but the stories told are rarely about us.

Look through any newspaper, magazine or cast list. Look at billboards, posters or advertising pamphlets. Start counting and you may be surprised to see firstly that the images of men far outnumber those of women, but more astoundingly that the females in the images are generally young, attractive and often naked, whereas the men in the images range from young to middle-aged to old.

I first became aware of the issue in 2004 when elected as Equity Vice President. I had been on the council for ten years, concerned with readable TV end credits, Arts Council funding, establishing collective agreements in games and other new broadcasting platforms; in brief, all the areas that effect the lives of performers and other creative types. As an officer I was able to attend any committee or working party and decided to visit the Women’s Committee. It was there that I learned of their desperation for portrayal research.

See also  Iris: A night at the cinema

Around the same time I was invited by Women in Film and Television (WFTV) to co- produce a BAFTA panel discussion with the showing of Rosanna Arquette’s series of filmed conversations with female Hollywood stars Searching for Debra Winger.

The film explores how, at 40, just as these famous actresses started to mature, hone their craft and began to know what acting was about, their opportunities to get work in Hollywood faded away to make room for new, young female talent, around whom scripts were written. This was not happening to their male colleagues, whose careers continued to flourish.

Looking at Equity it was clear that the same was happening over here in the UK. Equity membership of around 36,500 has a more or less equal gender split, yet actresses find their careers winding down from the age of 40 whilst most of the actors they worked with, trained with, continue to perform.

Research was needed if employers were to be convinced of this reality and rectify it. They had to believe this was not a figment of our imagination or just women kicking up a fuss for no reason.

We formed a steering group through the International Federation of Actors (FIA) and, funded by the European Commission, we researched the facts and compiled a handbook of best practices. The resultant 2009 report on performers’ employment in Europe showed that the majority of women see their gender and a mature age as an impediment to employment whilst men believe their gender and getting older are an advantage.

At our campaign’s core is a group of feisty women from the Women’s Committee, the Equity Council and other members, as well as a slowly growing band of supportive men. This is not just about work opportunities for actresses – for the young in the future, for the older actress now – it is also about society and the value we should place on a truthful representation of women’s lives.

The media has a powerful influence on how we view ourselves and others. Swiss Rapporteur Doris Stump says to the European Parliament in her report on ‘Combating sexist stereotypes in the media’:

“When they are not under-represented or invisible, women are often represented in the media in roles traditionally assigned by society, portrayed as passive and lesser beings, mothers or sexual objects. These sexist stereotypes in the media perpetuate a simplistic, immutable and caricatured image of women and men, legitimising everyday sexism and discriminatory practices and establishing a barrier to gender equality.”

Check out a US film, promoted by Oprah Winfrey, entitled Miss Representation which looks at how the media distorts, censors and exploits the female image. Prepare to be shocked.  We are keen to make a UK version.

We believe our campaign has begun to inform some broadcasters’ choices. Series such as Vera, Scott & Bailey, Downton Abbey and Call the Midwife have certainly put females of all ages centre stage and we like to think Equity’s viewers’ petition, signed by over 10,000 people, has helped move this along. Do please sign it if you have not done so already and pass the details on.

What’s the story on TV tonight … that women are the minority sex with a reduced shelf life?

Last year I was asked by the BBC Director General to give evidence to a survey on portrayal and was able to use many quotes from this petition. The conclusions in the report ‘Serving All Ages’, published in January 2012, draws attention to the public’s desire to see more older women represented on screen.

So, the fight for gender equality continues and many young women are speaking out. But let’s be clear: until the invisibility of women over 40 is addressed, until older women are empowered, the same old cycle of young, talented women eventually being sidelined, ignored and silenced will continue. As a wise woman says in Miss Representation: “You cannot be what you cannot see.” Older women should be role models, not invisible bystanders.

See also  Ship of Haunts: the other Titanic story

Over half the viewing public is female, yet in TV drama for every female character, there are two male characters – (36.5% female roles to 63.5% male roles).

Whilst leading parts are frequently played by male actors over 45, women in this age group start to disappear from our screens.