I am a little in awe as I pick up the phone to speak with Rose (she refers to herself just as Rose). This is a lady of the moment all right, after a recent joyous interview with Kirsty Young on Desert Island Discs and then speculation in the Telegraph and elsewhere that she may well be the first female bishop in this country … who knows, perhaps even later this year. She ticks the minority boxes too: female, black Jamaican and having started out with very few of life’s advantages. 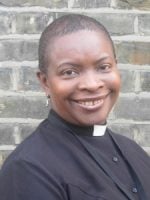 Anyway, from the moment we make contact I feel at ease (despite my having lost her phone number and she having prepared her room, expecting me in person!). It strikes me straight away on hearing her warm Jamaican accent and engaging laugh that Rose is a people person if ever there was one.

What does her role as Chaplain actually entail?

‘Pastoral,’ she says very firmly. ‘A chaplain takes care of an individual’s spiritual well being. People are not robots. They are not just physical beings; all their emotional, psychological and spiritual needs must be attended to.’

She describes her Westminster ‘parish’ as over 5,000 in number including the MPs (all 650 of them), but also the cooks, cleaners, doorkeepers and visitors in the Palace of Westminster.
‘Being a chaplain is about having a presence in the place, loitering with intent.’
She illustrates this by recalling a hospital porter in a hospital she was visiting driving past her on his motorised trolley and on seeing her dog collar asking her to pray for him, ‘now’. She duly obliged.

As we go on, I see that Rose just loves similes and metaphors and is really skilful at picking the right one every time. I love that image of her loitering with intent in the corridors of power, just being there ready to help and pray. As she continues to talk expansively and easily, but always with purpose, I get more and more a sense of a very strong woman with enough love and compassion and time for all who might come into her path, whether MPs or porters.

She sees people, MPs included, as deeply religious beings: ‘People gather together and deep in their hearts they are praying, they are gathering together for worship.’ Thus she has no doubt that the chaplain role in Parliament serves a much-needed purpose. I wonder which MPs use her services most, but decide this might be an inappropriate question, so I leave it for another time.

In terms of duration of the chaplain’s role, there is no fixed tenure and so she is there for as long as she is there. She feels keenly the weight of the House of Commons and has awe for it, without being in any sense over-awed. ‘With every step I take I am very much aware that I am walking through a slice of history.’
‘I know the circumstances and the burden of responsibility of the people I serve.’

Is she in a position of power?

‘Well, I certainly didn’t go after power, I never even thought about it. I never, though, take my position for granted.’ She explains that she knows she is a role model for some women and recalls being very moved when an Asian lady she met told her she had become ordained, having seen Rose speak and been inspired to believe that she too could be what she wanted to be.

Talking further in the context of role models, Rose says: ‘Women are not always the best advocates for womanhood. When I see women in positions of power around the world I wish them well. I don’t start pulling at the threads to unravel them. We need to admire their amazing skills, their craftsmanship, just as we do tapestries, seeing all that has been done to make them possible … I hold them in prayer.’

Are you a feminist?

‘Yes. I see feminism as a celebration of womanhood. Feminism should celebrate us being the best we can be. There are no barriers but ourselves. This doesn’t mean we can always do everything, we need to be honest about what stage we are at in our lives.’
‘God made us women for a reason. It wasn’t a mistake.’

But she stresses that none of this is about putting men down, ‘We need equal partners, fantastic women and fantastic men to be with them.’

Her conclusion is that we do need affirmative action to put talented women in the right places and nurture them. ‘We need lots of women in senior roles, not just one of them. Women are all capable, but they need to see reflections of themselves, images as to what is possible. In Jamaica when I was growing up I knew I could do anything because there were women in all walks of life at all levels. It is not the case here.’

How to deal with prejudice

Rose is pragmatic about prejudice. She sees it as putting people in boxes, so we need laws to counter this where people won’t move on in their thinking. We are also best to treat those showing prejudice with love and generosity. Above all, though, she sees, I think, that it is down to each individual, down to us: ‘I say to my children don’t allow others to change you, you can only legislate for who you are, what you believe in, how you behave …’
It crosses my mind that these children are rather lucky to have Rose as their mother with such strong beliefs showing them the way.

Are we a Christian country?

‘We are a Christian country, ridiculous to suggest we are not. We can all be whatever we want to be, just get on and be it. Christians in this country have been very generous in allowing people to be what they need to be …’

As for the legitimacy of the religious case against women bishops she is crystal clear: ‘Don’t believe for one moment it’s theological.’ Instead, she sees it as blatant prejudice, an inability ‘to give way to the rational’.
In line with her views that women can do anything, she says that women can, of course, be bishops, and that the Church is so much the poorer for not making full use of their unique gifts.
Still, citing the rather apt proverb, ‘Necessity is the mother of invention’, she seems confident that this change will come, sooner or later.

Have you ever been lonely?

‘Perhaps as a child I was lonely, but never in my adult life because of my faith. My faith tells me I am not alone. Rather than talk about being alone, why not say you are being with yourself? Have a love for yourself as a creation of God. I work with people to help them spend time with themselves’.

‘Well, I thoroughly enjoy what I am doing. Life is a gift so we should enjoy every moment, every taste, every smell, every relationship of every day. Que sera, sera. The dice is thrown – I don’t worry if it’s a two or a five!’ … and she laughs that lovely infectious laugh of hers.

Somehow, after putting down the phone to Rose, not only do I feel uplifted (and strangely sad that I won’t be talking with her again, for a while at least), but I feel full of intent to do good and also to celebrate women, and both these things, just for a split second, feel easy to do. Thank you so much, Rose, and keep on enjoying what you are doing.