I meet Venetia Williams at her beautiful home, which used to belong to her grandparents, just across the River Wye from the village of Hoarwithy, Herefordshire. Parked up outside the house are her Aston Martin, in which she is known locally to pick up pace, and the Jaguar given to her after her magnificent win at the Grand National in 2009 with Mon Mome, a 100-1 ranked outsider. 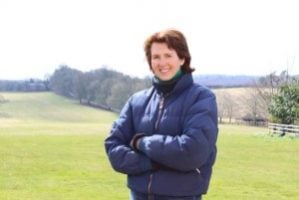 Her home nestles in a dip and is surrounded by the rolling, friendly hills of this county and, of course, her horses (some 100 of them) largely being trained for her clients, but with a handful handpicked by Venetia herself from France or Ireland for onward sale at some point.

There is a motto emblazoned on the front of the house: ‘Never Say Die’ and I wonder if this is Venetia’s code for life. I hope to find out.

After being whisked up to the Gallops by Venetia in the Jaguar to view the horses in training, one has the overwhelming feeling that during our chat she is not missing a single trick as jockeys and riders fly past. We return to her warm, light, orchid-filled kitchen to talk further.

I am a little nervous as Venetia has a reputation for being private and reserved and it strikes me that she is meticulous in all she does and may well not suffer fools! However I have already seen that she commands a warm and absolute loyalty from her small team around her and I like the fact that several of them tell me her horses are treated as real horses so they are turned out every day, just to play and be, in the countryside.

We start recording and, after the buzz of the morning, which was particularly busy indeed with the Grand National looming and the stables having their best season ever, Venetia gives me her full attention.

With your family background was it a given that you would go into the world of horses and racing?

No, not at all. My grandparents bred horses after they retired so I grew up with horses, staying here in the holidays. My mother did a bit of riding – she did win the Ladies National Championship one year at White City, but there was no assumption at all that I would go into riding.

I left school in Cornwall and went to secretarial college in London and had a few secretarial jobs, but my career changed when I saw an ad for a secretary for a horse trainer in Newmarket and applied and got the job. It really all started from there.

Fast forwarding, would you tell us about your horse-riding accident in 1988?

At the time I was riding as an amateur jockey – I was not at all good enough to be professional. I did manage to get into the Grand National where I fell at Beeches Brook, and two weeks later I had the accident at Worcester.

I was in the lead and a certain winner when the next thing I knew I was rolling over and coming to rest with my face down in the grass. It was as though my neck was in a U-bend and below my neck the rest of my body was suspended above the ground. I thought to myself: “I can’t feel anything, I can’t move” but beyond that it never for one moment occurred to me that I was paralysed. After ten minutes from my neck down I had, for a few minutes, violent pins and needles. I had broken the ‘hangman’s bone’ as it’s called but fortunately it was not displaced.

I was very lucky, lucky not to have died. I think the fact my spinal chord bruised so badly meant my whole body shut down so I couldn’t move and this is what saved me.

After your accident where on earth did you find the drive, energy and determination to start up a second career?

Well of course you just carry on don’t you, everyone would.

Some people might have just curled up in a ball?

Oh no, you know what your options are. You’re alive, you’re fine…off you go, just be grateful. For some time after it just gives you a great appreciation of life. It’s a very good mindset. It’s important to keep bringing yourself back to that – appreciate every day, as you don’t know how many you have left.

Would you say you are now in a place of happiness; would this be your happiest decade?

Well the fact we are having this conversation now on this day, this year, coincides with my best season ever – we are now third in the trainers’ table, which is great as it’s what I do, it’s what occupies my head every day. How the season goes is perhaps 70% of my happiness, 10% health and say 20% friends, though of course one can’t be precise, it’s wrong to quote numbers.

Would you describe yourself as a woman in a man’s world?

I knew you were going to ask me that [laughs]. It was probably an advantage when I first started as I got some publicity and interest I might not otherwise have had and which perhaps wasn’t due.

Did everything change when you won the Grand National?

Absolutely nothing changed! Curiously after a year I was contacted by some owners who thought I would have been overwhelmed with requests but I wasn’t. The day after winning it was completely quiet!

READ  Can female entrepreneurs take their place in the global market?

What has been your biggest mistake?

I think it was when my mother, who died at the age I am now (52), was diagnosed with cancer and the doctors and everybody really told me she was going to live. If I had known she was to die within six months I would have spent that time with her. Yes it was definitely my mistake.

I was going to ask you if it is a lonely job but you are surrounded by your team and it is clearly such a busy life?

Yes it can be lonely, I am single and I live on my own, but everyday I am surrounded by everyone who works for me and I do regard them as my family. I also have some very good friends not remotely involved with racing who are not so far from here, which is very good for me. I slightly bemoan the fact that I’m single but I do know there are many people in less than happy domestic situations, if I can put it like that, and so I don’t feel at all that I necessarily have the worst draw!

So my impression of Venetia Williams? A very modest, honest, thoughtful and inspiring lady – perhaps a little lonely, although I am not actually sure she has time for loneliness. She is quietly yet absolutely driven, and is making a superb fist of what she does.

I ask her informally at the end of the interview if she has ever been on Top Gear, given her love of speed and cars…she thinks she was shortlisted once and seems a little disappointed she hasn’t yet made it on. I couldn’t think of a better candidate if you are reading this, Mr Clarkson.