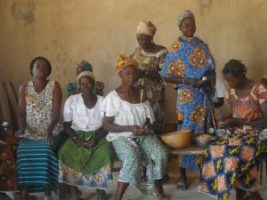 Did you know 8th March is International Women’s Day? I have to admit that, for me, this date elicited little more than a fleeting moment of recognition. How such a day, one that the UN has been celebrating every 8th March since 1975, could have escaped my undivided attention all these years is truly a mystery.

Whilst volunteering for Kabeela, a women’s association supporting income-generating activities (IGAs) in the Oubritenga province of Burkina Faso, I have come to realise that International Women’s Day is actually a huge deal. Once only vaguely aware of its existence, I am now immersed in a burst of preparations for ‘the big day’, the day when my Burkinabe friends and women all over will stop the daily grind and come together to celebrate being women.

No Burkinabe woman would miss the opportunity to enter into the festivities, dressing herself in the special fabric designed each year to honour the date, going out into the streets, dancing, singing, selling their produce and generally making merry. The 8th March represents not only an opportunity for them to rejoice the achievements won in the fight for gender equality in Burkina Faso, but importantly to put pressure on the decision-makers (husbands, chiefs of villages, local ministers and the government) to further improve the situation of women. For, in a country which ranks 115th of 135 on the Global Gender Gap Report (2011), the inequalities are considerable.

In a society that remains deeply patriarchal, it is not hard to see why “8th March fever” takes hold. In 2013, women in Burkina Faso still experience many restrictions on their civil liberties and entitlements. Denise, Kabeela’s treasurer since its establishment in 1997, often chats to the British volunteers about the status of Burkinabe women. She acknowledges that women here have certainly enjoyed greater freedom in the last 20 years, but recognises that there is still much to progress to be made.

Not so long ago, and even in some cases today, as a woman, unless your husband, father or brother has told you to do something, you do not think of doing it. That includes even the simplest of things, such as going to the market or visiting friends. In a rare allusion to Burkina Faso’s brief experiment with communism in the mid-1980s, Denise declared that Thomas Sankara (the Che Guevara of Africa) in his short term as president, in fact did a lot for women. For example, he encouraged Burkinabe women to learn to drive and granted them permission to hold driving licences themselves.

There is, of course, an abundance of statistical evidence to support the anecdotal, showing that Burkina Faso still has much progress to make on the path to gender equality. Ironically, though Burkinabe law states that women are to be treated as equal to men, no legal framework exists to protect women from one of the most common injustices they face: domestic violence and sexual harassment.

When it comes to education, literacy rates amongst women (typically one of the strongest indications of gender equality) remain especially low, with only 33% of females aged 15-24 years old being literate, compared to 47% of males. A UN survey conducted in 2003 showed that much emphasis is still placed on early marriage, with 32.2% of females aged 15-19 either married, divorced or widowed.

As well as these social indicators, statistics on health also show little will to invest in the lives of women. The lifetime risk of maternal death remains alarmingly high, due to lack of human and technical resources, meaning that 1 in 28 Burkinabe women will die in childbirth.

Despite women being granted the right to reproductive health and a nationwide initiative being put in place to provide contraception to women, it is thought that just 17% of women of childbearing age use them. The fact remains that men still predominantly make decisions about women’s health and most doctors require written permission from the husband before a woman can access contraceptives. Unfortunately this is something which husbands are often not willing to give.

And so it becomes crystal clear why it is greatly important to celebrate a day which champions women’s empowerment here in Burkina Faso, and indeed other places in the world where women do not enjoy equal status. This year, the province of Oubritenga has chosen to centre 8th March theme on “Female Entrepreneurship and the Economic Independence of Women” – particularly pertinent for the Kabeela association, which focuses on supporting women’s IGAs, regularly producing shea butter, soap and spices to sell.

Angel, a colleague at Kabeela, said of this years’ theme: “It’s bringing the women to the forefront. There are women who have the capacity to lead businesses but they are always behind men. This day is about boosting women so that they can take the initiative.”Solange, the secretary, is equally excited, explaining that for her International Women’s Day is the one day when women are honoured, they will wear a fabric designed especially for them, men will take care of the children and the home and women will party from daybreak until dark!

As for me, I am excited to don an 8th March dress, to go out with the women of Kabeela, to sell shea butter, spice and all things nice, to march, to demand equality for all women and to wish everyone a happy International Women’s Day!

For more detailed information on violence against women in Burkina Faso see this 2008 study.