Anita Corbin has been working on a photography project focusing on how the women of the past 100 years will be remembered. 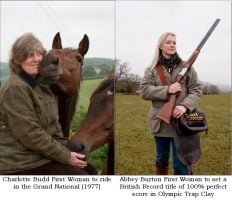 The project is due to culminate in 2018, marking the 100th anniversary of women’s suffrage. She is shooting and collecting 100 iconic portraits of 21st century women who have achieved the landmark title “First Woman” across a range of fields.

To mark this year’s International Women’s Day, she has photographed two prominent women from her own home county of Somerset: Charlotte Budd, the first woman to ride in the Grand National (1977) and Abbey Burton, the first woman to set a British Record Title of 100% perfect score in Olympic Trap Clay Shooting.

Anita, who runs Corbin O’Grady Studio with her husband John, began a project in the 1980s entitled ‘Visible Girls’, celebrating a newfound freedom for females to truly be themselves. It is great to see that she has now been able to move on to a project celebrating not just the visibility of women, but their success too.

‘First Women’ will launch as a UK travelling exhibition in 2018 and the portraits will also be published as a photographic book with introductory essays.