Have you heard of International Women’s Day? I had, but didn’t really know much about it. But this annual event is hugely important to women all around the world, as I recently discovered. 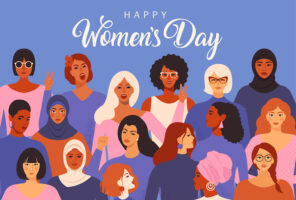 It started when I overheard a conversation in a coffee shop last week:

“What are you doing on Monday?”

And there the conversation ended as the women moved away.

Going home later, I realised that, although I am aware International Women’s Day is an annual event, short of perhaps noticing a special programme on TV or the radio, I have never paid it any real attention.

So I decided to find out more, and soon discovered its global importance.

Annually, on 8 March, International Women’s Day is universally celebrated with all kinds of events. In fact, it’s an official holiday in over 20 countries. In China, appropriately, the holiday is only for females!

How it all began…

The first National Woman’s Day was celebrated in the USA back in 1909. Established by the Socialist Party of America, it was to remember and honour the women who had gone on strike in the New York garment industry the previous year. Their action had been prompted by their unfair working conditions.

The following year, the Socialist International, meeting in Copenhagen, voted for a day to be set aside to honour women everywhere and to support them in their struggle for universal suffrage.

Several decades later, in 1975, which was the International Year of Women, the United Nations decided it would sponsor the day in the future and set the date as 8 March.

See also  Domestic abuse: it was all my fault

Worldwide, women make up 50% of the population and continue to contribute to social, economic, cultural and political achievement. We have much to celebrate since those first days just over 100 years ago.

Each year the United Nations nominates a theme. This year it’s #ChooseToChallenge, a nod to the growing global push for professional and social equality.

In my world, I would say that I am completely on a par with men, as far as my rights are concerned. I have a full vote, get an equal pension – thanks to my previous occupation of teacher – am not socially dependant on a male, am free to worship whichever god I choose,  have my own passport, drive my own car and can usually walk the streets of the city where I live without a sense of danger. Plus, the legal system of my country supports all of these rights.

Check out what’s happening in your area

To millions of women around the globe, I would appear to be a very fortunate and affluent female. Many of them have no entitlement to any of the ‘rights’ on my list.

Things I take for granted are simply not available for them.

If you were asked how you think this over-reaching aim for parity is doing, I suspect you’d answer that it’s making great progress: the topic of gender equality is constantly in the media and there is lots of legislation to support it.

After all, in many countries, we now have top female CEOs in business, equal pay in jobs, and equal opportunities of many kinds. Things must be getting better. But that’s not the case. Progress towards gender parity has actually slowed in many places.

The World Economic Forum predicted in 2014 that it would take until 2095 to achieve global gender parity. Then one year later in 2015, they estimated that a slowdown in the already glacial pace of progress meant the gender gap wouldn’t close entirely until 2133.  Another 120 years!

See also  A voice from Malawi: cry my beloved forest

The Global Gender Gap Report reveals that 6 of the 111 countries they studied now have worse opportunities for women than they did nine years ago – Sri Lanka, Mali, Croatia, Macedonia, Jordan and Tunisia. The four issues that are tracked – economics, politics, health and education – show that we are not heading towards parity throughout the world.

That’s bound to be because of Third World and under-developed countries, I hear you thinking. Not so. Although the UK’s overall score is largely unchanged, it has fallen from 18th to 26th on the Gender Inequality Index ranking. This is its lowest point since the index began.

Interestingly, the health and survival gender gap is the narrowest overall and 35 countries have managed to close it completely. Unfortunately, it has widened in over 40% of the countries measured.

Wherever we live, the same five main issues affect women. These are:

Moving beyond the stereotype

Faced by all the facts and figures around Gender Equality, it’s hard not to feel overwhelmed and wonder, “What can I do?”

For me, the solution is to refuse to give into the gender-biased rules set by society and retailers. It may be hard, because we are bound to be judged or criticised by others. Maybe if we all stick to trying our best to live by ignoring gender-stereotypical ideas, the future will be gifted with well-rounded children.

This is where we must begin. Being aware of how we talk to our children, teaching them to regard each individual they meet as valuable and equal in society and encouraging them to choose clothes, toys and activities that are not gender biased.

And watching our language. Sit on the bus one day and listen to mothers talking to their children. There is often a distinct bias exhibited, based on what boys and girls ‘should’ do.

The right for gender equity seems to have only just begun in some parts of the world. In others, it appears to be well on the way. But not everyone is equal and safe. Ultimately, it seems to me that it will only be through each individual adapting her or his beliefs and actions that change can occur.

And although I am writing this from a female’s point of view, I am well aware that “gender parity” is not just about women. It’s about all humanity – men and transgender people too – but that’s another article.