Wilderness is not a luxury, it is essential for the human spirit. 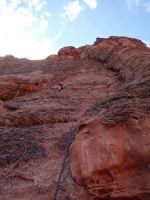 I hardly sleep… “another suitcase, another hall” … it’s a little how this holiday in the canyon lands of Arizona and Utah is feeling. I have been longing for total immersion in the stark, stunning and extraordinary landscape of the desert but my husband and I have reached our inevitable compromise where we stay in hotels close by rather then camp in the middle right where it’s at. At last though a long day in the great American outdoors beckons. I am excited and nervous at the same time.

To explain the “nervous” bit, a particular activity is planned with my 17 year old son in mind… rock climbing. Rock climbing… how hard can it be!?

We depart for the rocks at 5.30am… an early hour at the best of times but when on one’s summer holiday and really quite weary from checking in and checking out I can confirm that 5.30am is very, very early.

We drive through the switchback bends of Zion National Park and on to St George, a laid-back place with, if not a moderate climate (100 degrees at midday), then at least a less extreme one than that of Phoenix, Arizona or the national parks in the area. A whirlwind of an introduction and then my son heads off with Todd in one direction for an intensive day of technical climbing whilst  we are off to Snow Canyon State Park – fitted out with harnesses and climbing shoes, and accompanied by our instructor Matt. Matt is a man of few words but therefore every word with him counts and this I appreciate more and more as the day goes on. He starts us off with a couple of warm up climbs and do bear in mind here that we (husband, 14 year old daughter and me) are complete novices at rock climbing or indeed any type of climbing bar climbing the stairs to yell at the children type of climbing.

READ  Middle-aged spread is not inevitable

Matt is very long limbed and very lean, an ideal rock climbing physique. None of us have this ideal rock climbing body. Matt climbs freely and easily up some 90 foot of more or less sheer sandstone rock face, and fixes up ropes, which are quite literally to be our lifelines. 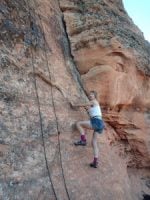 My daughter, always bold, puts up her hand and she is off up that sheer face. She is strapped on such that if she slips she will be held on the rope by Matt but it’s still not good watching your 14 year old flattened against flat rock some 60 feet up yelling down that there are no foot holds at all. Only at this stage does Matt inform us that this is known as “slab climbing” by which he means that there are indeed no footholds! He then adds that he is not a fan of slab climbing!  Words fail me! Miraculously my daughter makes it up and then rapells (abseils) down.

The only bad thing about Daisy coming down is that it is now my turn to go up. 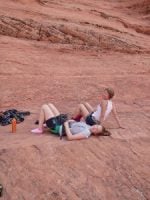 The first 15 feet are not too bad… there are conventional juts and cracks in the rock that I can lever myself up on… just like a childhood holiday in North Devon I start to think, almost smugly. But then I reach the slab. I scrabble around up above my head for hand holds and put my foot on a minuscule piece of sticking out rock, about 1 inch sticking out. I ask Matt what I should do next and he drawls back, “stand up on it”… stand up on a 1 inch bit of sandstone…ha ha ha… but actually the man is insane and he means it. Eventually panting and swearing and cursing I stand up on it on my right leg and this allows me to find a tiny end of finger hold up above my head.

And so it goes on nightmarishly until I am at the top of the rope… 90 foot up… “Smile” calls out Matt as he snaps a photograph. The man is beyond insane but I oblige and grimace at him… he is my only means of getting down. I have never abseiled before in my life but I cannot tell you what a relief it is to do this. I get down to terra more or less firma as dry-mouthed as it is possible to be. Somehow we do 3 more climbs that unforgettable morning and on the third one we scale 150 feet.

Right now I am sitting poolside in Las Vegas and as I try to block out the thud of the music and the screams from the wave pool, I realise that Matt and Todd are the sane ones. I am desperately missing that harsh bare desert landscape and yes I am even missing the challenge of standing up on 1 inch of crumbling sandstone high up above the world.