Home / Time off / Culture / Books / In the name of research: My stand-up comedy challenge

Author Margaret K. Johnson delves into the world of stand-up comedy for her new book. 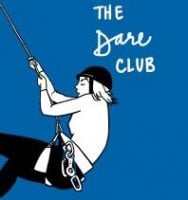 As a novelist, I take my research seriously. I’ve had unsuitable relationships, got my heart well and truly broken, and visited exotic countries – all in the name of research! OK, not all of it was research – some of it was just life happening. But recently, as research for my novel The Dare Club, I attended a weekend Stand-up Comedy Course in London.

I’d better explain – I used to have an extreme public speaking phobia; just saying my name out loud at an Adult Education class was a major big deal. I was the proverbial mouse. Gradually I chipped away at this over the years until I qualified as an Adult Education teacher. It took a lot of doing – but that’s another story.

In the Dare Club, a group of very different people meet at a Divorced and Separated course and challenge each other to do scary things as part of their recovery process. As I haven’t been teaching for the past two years, I was starting to feel afraid that my hard-won public speaking skills might slip. So I decided that Colette, one of the characters in my novel, should try stand-up as one of her challenges.

As I went down the steps to the fringe comedy club, I was feeling excited and nervous at the same time. I’d been looking forward to doing the course, but would I be able to do it? Would I think of anything to say? Would people find me funny? Would I have to do what someone on Twitter advised me to do and strap an onion to my forehead to make people laugh at me?

I needn’t have worried. The course was really good fun, and I learnt loads – about writing and performing stand-up comedy, and also about myself. Within minutes of the course starting, myself and the other four students learnt how to use the microphone and to move the mic stand without it falling apart. Crucial skills for a stand-up comedian, I feel.

Not very long after this, we all got feedback about the image we presented on stage. First, we had to say how we thought we came across, and then it was the others’ turn to pitch in. Apparently I’m a bit hunched and I put my weight more on one leg than the other. Oh, and I also have very long arms (I’m thinking a bit orang-utan by now). But, good news – the lines and face-sagging I had mentioned were disagreed with – huzzah!

Later we all had the opportunity to spout complete rubbish into the microphone – on a subject that we had about five seconds to think about. My imagination ran riot as I talked about why the French have banned Staffordshire Bull Terriers – staffies are such good clothes designers that French doggies are leaving handbags across the land to run after the muscle bound hunks as they strut their stuff, didn’t you know? It was great fun, and it’s amazing what you can come up with! And not one onion was required.

By the end of the weekend we all had three minutes of material that we’d rehearsed in front of the group. Stage two of my challenge, if I choose to accept it – and I really should do because Colette, plucky woman, is going to – is to return to London to deliver my three minutes’ worth to an audience. “It’s a long way for 3 minutes,” I’ve been told, and yes, it is. But that’s missing the point, really, isn’t it? It’s a personal challenge. And also, a way of feeling really alive! Yay! Bring it on!

It is a follow-up to The Goddess Workshop