Marriage issues are never fun, and sometimes they lead to divorce. 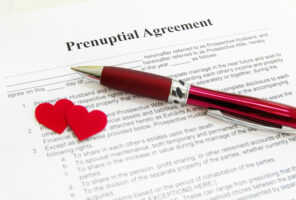 Prenups are designed to protect couples in a worst-case scenario. A prenuptial agreement is a written contract between two individuals entering a marriage that determines how assets will be managed in the event of a divorce.

For some, a prenup is a necessary part of protecting themselves, while to others, a prenup can feel more like an insult. When you think of your wedding day and the long to-do list of tasks that precede your special day, the last thing you want to have to think about is the fine print of a prenup.

It’s crucial that you take care of the small steps that ultimately protect everyone in the long-run – even if it’s not so fun. When you take care of your prenuptial agreement during your early days while you’re happy and less inclined to make emotional decisions, it ensures a potential separation will be more fair.

However, there are still some misconceptions about what it means to have a prenup. For instance, according to National Family Solutions, a firm that helps protect and enforce child custody laws in Texas, children cannot be included in prenups because it’s up to the court to determine what’s in the best interest of children based on the evidence provided. But this is just one myth regarding prenups. Here five more myths, debunked:

Prenups are for the rich

There’s a common misconception that prenups aren’t required unless one or both parties involved are wealthy. But this couldn’t be further from the truth. For starters, prenups don’t just protect cash – they protect all sorts of marital assets, including a house, vehicles, and even pets. Anyone can have a prenup, no matter how much money or material possessions you have.

See also  Why making a will is so important...

Omitting some finances Is okay

This one is a bit tricky. Prenups require full disclosure to be valid. For instance, if you have an offshore account somewhere, a property you didn’t include in your prenup, or additional debt that your partner doesn’t know about, your prenup can be thrown out entirely in the court of law.

In the event that you need the prenup, if one partner can prove that the other omitted information for their own personal gain, it can invalidate the prenup due to lack of “full and fair disclosure.” If you have financial assets elsewhere, they do need to be listed. This is the entire point of a prenup—to protect the things you have in the event of a separation.

You can include anything you want

There have been some pretty strange prenuptial agreements out there. For instance, some prenups have stipulations on the wife’s weight, stipulations on how much reality TV or sports a partner can watch, and even how often in-laws are allowed to visit. And while you can put whatever you want on a prenup, that doesn’t mean it will actually be enforced in the event of a divorce. If your contract is too unreasonable or has wild expectations, there’s a chance it may be deemed inadmissible in the court of law.

You don’t need a lawyer

A prenup is a massive binding agreement – you can’t just print a sample prenup from the Internet, make a few customizations, and call it a day. Many couples believe they can DIY the prenup and save plenty on legal fees. A professional will help you determine the best course of action for all parties involved and ensure their contract is fair and that there are no loopholes that can be exploited later down the line.

People who sign prenups expect the marriage to end

This is one of the biggest misconceptions of all. There is plenty of debate about prenups, and one of the most controversial viewpoints is that people who want prenups don’t expect their marriage to last and don’t have enough faith in their partner. Statistically speaking, however, a person who wants a prenup is making a methodical decision based on real data and personal beliefs. With nearly half of all marriages ending in divorce, the statistics are often stacked against you.

No matter how much you believe you have an airtight marriage, things don’t always work out that way. Furthermore, there isn’t concrete research that suggests prenups increase your risks of getting a divorce. In fact, 86% of mental health experts in one survey agreed that prenups do not have a predictable effect on marriage.