Home / Happiness / How to make changes and transform your life

Over the years I developed a whole arsenal of techniques that would stop me from making any changes that would enable me to create a happier and more fulfilled life. 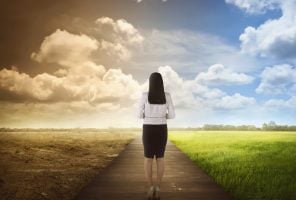 I would focus on a wide range of fears, some were realistic while others were rooted in my over-heated imagination. This would probably have been enough to stop me dead in my tracks but, just to make sure, I also found creative ways to oppress myself.

The one example that is most vivid in my mind is when I first decided to leave my marriage of 37 years. As soon as I made that decision I was assaulted by thoughts such as “I can’t abandon him now that he’s old and force him to live in a bed-sit all on his own.” My Mum’s exhortations never to deliberately hurt another person returned with a vengeance – however misplaced.

Other ways I stopped myself were through my limiting beliefs of which I had many. Some of those centred around what I deserved in terms of the good things, such as success, abundance, even love.

Fortunately, I was able to explore my beliefs and fears with my life coach.

Identifying whatever is stopping you from making the changes that would introduce more joy, meaning and fulfillment into your life falls under the heading of becoming more self-aware; discovering what you do that works for you and what you do that doesn’t.   And that starts in your head. You need to start by identifying your belief systems around what you do and do not deserve. You do this by paying attention to what it is you tell yourself which is your Gremlin, your critical inner dialogue. Once you’ve figured out how you’re stopping yourself you will be able to do something about it.

However, be prepared: you may find that, the moment you decide to make a change, you will be assaulted from all sides by a variety of obstacles.

External obstacles show up in the form of other people’s resistance to your attempts to make changes; these are people who don’t want you to change. The reason for this often is that people see themselves in the context of others 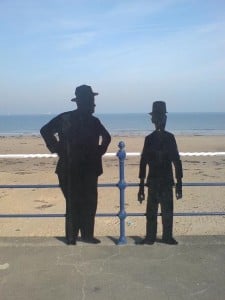 I used to be very overweight. One day I decided to go on a diet. At first, people supported and encouraged me but, after a while, they started to make casual comments such as “Are you all right? You look a little haggard.” Or they would offer cake and say “Go on, it’s just a small piece. You can always start again tomorrow.”

I used to wonder why they would do that and this is the conclusion I came to. People see themselves in the context of others, for example, if you’re pretty and slim and I’m fat then you stand out as “the pretty one who’s friend with that fat Sue”. But, if I’m now pretty and slim too, then you’re no longer the pretty one (by which I mean ‘special’) because now we’re both slim and we can’t both be special, can we? At least not in that particular context. Normally, neither one of us is aware of this.  All you know is that you no longer feel comfortable with the new me and you might try to sabotage me.

And here’s another example: you have become more self-confident and started affirming your personal boundaries. If we, your friends, have always known you as lacking in confidence and unable to stand up for yourself, this could be very unsettling for us.

See also  The emotions of life in lockdown...

How to minimize the risk? I suggest you share your desire to make changes with the people you’re closest to, your friends or your life partner, and ask them to support you. Perhaps they (but especially your life partner) may need to be reassured that any changes you hope to introduce won’t damage the relationship. However, this could be tricky if they are one of the things you’re looking to change.

Having said that, you have options. There is no need for an ‘all or nothing’ approach; there are various levels of change, including doing nothing until you feel ready to go ahead. Timing is very important.

When I was in your position I remember wanting to move forwards but felt stuck. I couldn’t move, couldn’t think, couldn’t choose, couldn’t decide, couldn’t take any action at all. In my case, the reason was fear:

Every one of us has fears that are specific to our own situation and we also put up a variety of other obstacles that can stop us from making progress. Or you may feel stuck: one part of you feels you can’t wait to move forward yet the other part is holding you back.

But there is another option, the 80-20 rule: choose the smallest change that could have a significant impact and is visible both to yourself and others. An example might be deciding to do something for yourself, which is something you very rarely do because of a deeply held belief that this would be a selfish thing to do. So start small, with a bubble batch instead of a quick shower. The impact of this is out of proportion to a ‘simple’ bubble bath.  You will have expanded your comfort zone, you will have done something for yourself, you will recharge your batteries so you have more energy, you will make it clear to yourself and others that you value yourself. But, to take those 20 minutes for yourself you may have to let something else go. That’s called ‘opportunity cost’ where choosing to do one thing means you cannot do something else. Choosing to do something for yourself is a huge step forward.

See also  Personal boundaries: how to change the way people treat you

Changing your life circumstances is a process, not an event. Trust yourself that what you’re feeling and experiencing is OK as long as you’re being honest with yourself and with other people in your life who are affected by your changes and shifts – both inner and outer.

Make the choice, make the change

The first thing to remember is that you don’t have to do anything until you feel ready to do so. At the same time, choices come in all shapes and sizes. Sometimes, the one really important thing is to simply choose. What the actual choice is, is less important. Making a choice, any choice, will unstick you because you reclaim your power and this is profoundly liberating.