Most of us think we look better with a tan. A golden glow makes us look and feel brighter, more glamorous and can have a slimming effect. 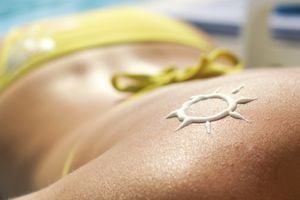 Our attitudes to tanning have changed quite dramatically over the years. White skin used to be seen as the more desirable – as the working class were tanned from outdoor labour. Then in the 1920s Coco Chanel popularised a tan as a must-have accessory.

And our approach to sun protection has changed too. In the 1970s model Marie Helvin advocated slathering your skin in sunflower oil before sunbathing.

However, since the 1980s cancer scares and media campaigns supported by dermatology experts have persuaded us to cover up and use high factor sunscreen whenever we are exposed.

More recently, much has been made of the chemical ingredients in sun lotions – are they bad for us? Can they effect fertility? Is it true some can even cause cancer? And what about vitamin D deficiency?

Aaaargh. Too much conflicting information. As with most things, there’s some fact and some fiction in reporting, and a common-sense approach is all you need.

So, should I wear sunscreen?

That is really the question. People tend to wear sunscreen to avoid sunburn, to protect their skin from the ageing effects of the sun and to ward off possible skin cancer.

When you sunbathe, you expose yourself to two types of ultraviolet light:

When you buy a sunscreen, you probably check the SPF – sun protection factor – which measures its effect against UVB rays.

To get the level of protection that the product promises you should apply two fingers of product per area of skin. Squeeze a line of cream along two fingers and apply the full amount to each of arm, leg, front of your torso, back of your torso and a single finger around your neck.

Repeat every two hours, because the chemicals that protect us absorb the heat and energy of the sun and break down in around two hours.

Can I get cancer if I don’t wear sunscreen? 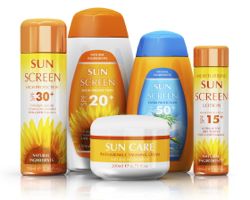 Research from 2001 showed that people develop the most common skin cancers, basal cell carcinoma and squamous cell carcinoma on areas of the body which are most frequently exposed to the sun – the face, nose, ears, hands, shoulders, forehead, arms and chest.

These cancers are caused by constant chronic sun exposure. It is believed that malignant melanoma is caused by short acute sun exposure-severe burning.

However the key word there is ‘believed’. So far no direct causal link has been proven, partly because it is considered unethical to deliberately try to cause skin cancer in humans.

Correlation is not necessarily causation – just because A happens at the same time as B doesn’t necessarily mean that B caused A.

So being exposed to the sun does not mean that you will definitely develop cancer. As people become more aware of skin changes more people are being diagnosed with skin cancer. So while figures for skin cancer appear to be rising, in fact the same percentage of the population is developing the disease.

Can I get cancer if I do wear sunscreen?

This year a number of articles have been published discussing the cancer-causing ingredients in some sun protection factors. We have also heard that SPF and other cosmetic ingredients can mimic oestrogen.

Known as endocrine disruptors or xeno-oestrogens these are chemicals which mimic female hormones and may cause change in the sexual characteristics of both men and women.

These can include the appearance of breasts in males, falling sperm counts and reduced sperm function and infertility.

There is also a theoretical risk that these chemicals might cause oestrogen- dependent cancers like some breast cancer and some ovarian cancers to grow more aggressively.

READ  A simple guide to interventions for addiction

Breastcancer.org has started a campaign to encourage people to Think Pink-Go Green. They suggest that by avoiding highly chemical sunscreens you reduce your risk of exposure to hormone disruptors and reduce your risk of fast-growing reproductive cancers.

We gain most of our vitamin D through the exposure of our skin to the sun. It’s an essential vitamin as it protects our bones and helps our immune systems to work effectively.

People with darker skins are evolved to protect themselves from strong sun in areas closer to the equator and need more sunshine to produce enough vitamin D.

In all cases, constantly covering up outside and more indoor working practices mean that our populations are becoming vitamin D deficient.

This has led to increasing cases of rickets in adults and children and an epidemic level of diseases such as autoimmune conditions and chronic pain states. Doctors are routinely testing for vitamin D deficiency and prescriptions for supplements are rocketing.

Since just 15 minutes a day of unprotected sun exposure to hands, arms and face can produce all the vitamin D you need this seems a sad situation.

Some sun exposure without sunscreen each day is essential for vitamin D synthesis. Allow yourself and your children to spend a little time in the sun absorbing the sunshine and creating health-giving vitamin D.

Which chemicals should I watch out for?

It’s generally agreed that the worst ingredients are:

Other chemicals to avoid include:

READ  What is the perimenopause?

European cosmetic regulations are far more stringent than American regulations. The worst offenders are rarely found in British products but the jury is still out about many others.

So what should I do? 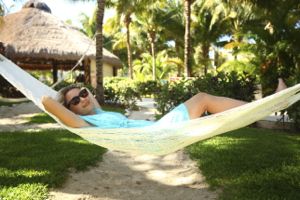 High-factor sunscreen can give a false sense of security. Try and find a happy medium between the joy of sunbathing and the joy of not looking 80 before you actually are 80.

Make sure you use plenty of soothing moisture on your skin before and after.

Choose a sunscreen that has a minimum of chemicals and opt instead for natural brands that use mineral filters like zinc oxide. These can be difficult to hunt out but are worth it especially for the tender skin of the very pale or those with small children to worry about.

Ultimately it’s a choice between common sense and being aware, as a customer, of the potential that some chemicals have to penetrate the skin and do harm while balancing a desire to be out in the sun and develop that healthy golden tan without ending up on the surgeon’s table.

And don’t forget – if it’s a golden tan you’re after, you can always fake it…