Talking openly about gynaecological problems and menopause isn’t always easy. These are deeply personal issues that we may not -understandably – want anybody other than those closest to us to know about. 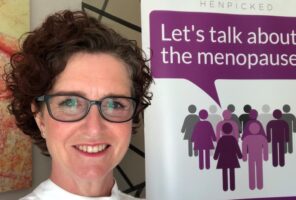 But since going through surgical menopause two years ago, I’ve discovered that it’s helpful to talk. Not just in a cathartic way for me – which it is – but also that my friends are grateful to find out about my experience and arm themselves with information regarding what they might expect.

I’ve actually had many years of gynaecological problems, starting around 11 years ago when I had an ovary removed shortly after the birth of my second child.

Although my C-section had been straighforward, I had a lot of pain in my side afterwards. I was referred for a scan and some keyhole exploration – and when I came round from the surgery I was told my ovary had been removed as it had become contorted, twisted and was starting to gangrene, which was what was causing my severe pain. The surgeons also noted that I had some endometriosis.

The next couple of years were governed by pelvic pain and heavy periods, with more keyhole surgery to cauterise the endometriosis. When my periods became extremely heavy I was recommended for an ablation, a procedure where the whole lining of the uterus is cauterised.

I then started to get breast pain, and my gynaecologist said my remaining ovary was starting to shrivel, wasn’t working well and it should be removed. So, nine years after my first operation, my second ovary was surgically removed – known as an oopherectomy – sending me into surgical menopause.

If I’d known then what I know now, I may well have tried to boost my hormones using natural methods in order to stave off or prevent surgery, as I felt pretty awful afterwards. My consultant wanted to put me on HRT but I felt I knew better and wanted to manage symptoms holistically. Next a visit to a medical herbalist, who gave me lots of supplement, food and lifestyle advice and herbal tinctures. I felt okay, and my symptoms were just about manageable but in general I felt lethargic and not myself.

My experience at work

I was under a lot of pressure in my recruitment job and when I returned from a holiday I was made redundant.

Looking back, I feel sure it was because my performance was being affected by menopause. My manager was a young man in his 20s and didn’t really understand what I’d been through – a lot of pain then surgery followed by menopause.

I soldiered on for some time, trying to keep active by walking and running, but noticed I was gaining weight. This was alarming as I’ve always been fairly slight. The back fat was the worst part. No matter how well I ate I’d either put on weight or stay the same, especially around my middle, it was demoralising to say the least.

By now I’d found another job, helping women return to the workplace after a career break. Although it was rewarding, my memory was awful, I lacked confidence and the hot flushes in meetings and at events were demoralising, I never felt I had clarity. Only now do I realise that it was due to my falling hormones.

This company were supportive and great at looking after me – I do remember though going to my interview with them and sitting pouring with sweat!

The worst thing for me came last summer when I started suffering from really awful vaginal dryness. I was in so much pain and I was miserable. This was my rock bottom point, I’d tried healthy eating, herbs, supplements and still felt awful. I went to my GP who gave me anti-fungal tablets, pessaries and creams. We didn’t discuss HRT and these didn’t help.

Finally I found a menopause specialist in the area. Sadly they are few and far between and only available privately. When I filled out my initial consultation questionnaire I ticked nearly the entire sheet of symptoms. I cried in the waiting room through realisation. Even my heightened tinnitus, which I had never associated with menopause! She told me in no uncertain terms that I couldn’t continue down this route “your life is going to be miserable and we need to get you on decent oestrogen.” For me the benefits outweighed the risks.

She put me on patches, tablets and suppositories. Within a month of starting the HRT I felt like a different person, the dryness started to subside. The tablets didn’t agree with me. So then we did have to re-adjust slightly to get the right type of HRT for me. It’s important to take control and do your own research as there are lots of options.

I felt the cloud lifting. Finally I could wake up without aching and I sleep so much better now. The family noticed I wasn’t shouting, crying, or being grumpy quite so often. Now I’m much more on the level. The house is so much calmer because I’m not getting antsy about the smallest thing. I thought that was just part of my personality, but it turns out it was my hormones.

My turn to make a difference for others

I wanted to do something positive with my experience. There was no support group in my area so I set about starting my own on Facebook. People can read my story, find advice and share their own experiences and we can support one another.

Now I’ve got my confidence back after being on a rollercoaster of emotions, including paranoia, anxiety, depression, not wanting to go out and not wanting to be alone. I feel generally much calmer and able to cope so much better with life. I’ve met new people by starting a new hobby and I’ve even been up on stage pole dancing!

I’ve started a clean-eating regime. And I work out with a personal trainer, strength training, and now my back fat is subsiding. Hurrah!

Menopause wasn’t easy but I believe that post-menopause I am a better version of myself. I now focus on my long term health and wellbeing, plus helping others live their best lives by understanding menopause and getting the right support.

READ  Menopause and HRT: what you need to know