Home / Happiness / How has Covid-19 impacted women and minority groups?

The disproportionate effects of the pandemic 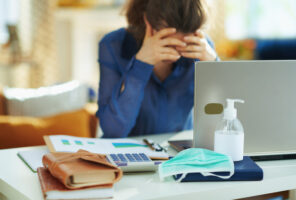 The Covid-19 recession is unique among modern economic shocks in its harm to women’s finances and prospects. Can this be reversed?

Covid has shown no mercy. Data shows that it has had a greater negative impact on those who already struggle in society. These impacts are not just in mortality. We can see disproportionate impacts  in economic and social factors too, to a devastating degree.

The pandemic has forced us all to acknowledge a complex picture of individual and community experiences.

And it has become increasingly clear that the impact on women has been severe. When looking at the gendered issues of paid (professional) and unpaid (domestic) work, domestic violence and pregnancy/maternity in particular, the picture for women is not a good one. Combining factors such as gender and race, gender and disability, the bad gets worse.

What are the impacts?

According to the UN: “Across the globe, women earn less, save less, hold less secure jobs, are more likely to be employed in the informal sector. They have less access to social protections and are the majority of single-parent households. Their capacity to absorb economic shocks is therefore less than that of men.”

The UN Secretary General said: “COVID-19 could reverse the limited progress that has been made on gender equality and women’s rights.”

Meanwhile, McKinsey reported in July 2020 of a ‘gender regressive scenario’, with women’s jobs 1.8 times more vulnerable than men’s globally and the virus significantly increasing the burden of unpaid domestic care, which falls predominantly to women.

The epidemic within the pandemic

There has also been an increase in domestic violence in lockdown. Refuge reported an average rise of 50% in calls. There were 13k+ calls per month April 2020-Feb 2021, 72% from women experiencing domestic violence. A fifth reported threats to kill them.

Sadly, almost 50 suspected killings of women and children by men happened in the first lockdown. Sixteen within the first three weeks, a significantly higher number than usual for that period. Confining victims under the same roof as perpetrators for prolonged periods of time is held to be one of the key factors for the rise.

The Lancet reported that some 243 million women are thought to have experienced sexual or physical abuse at the hands of an intimate partner at some point in the pandemic’s first 12 months. Many of these women were trapped with their abuser. Within one week of France instituting its first lockdown, reports of domestic violence had surged by 30%. The US Center for Reproductive Rights called it a ‘terrifying situation’.

The BBC calls the current situation a ‘she-cession’. Unlike other recessions, the pandemic recession has led to more job losses among women than among men. And in its Women & Work report, PWC stated that Covid-19 is reversing progress towards female economic empowerment.The Women’s Budget Group reported in 2021 that women are the majority of employees in industries with some of the highest Covid-19 job losses, including retail, accommodation and food services.

Overall, more women than men were furloughed across the UK, with young women particularly impacted. Between Q3 2019 and Q3 2020, the number of BAME women workers had fallen by 17%, compared to 1% for white women.

The dual pressures from childcare and work have also impacted women. 46% of mothers made redundant during the pandemic cite lack of adequate childcare as the cause.

Of parents who were in paid work prior to the lockdowns, mothers are one-and-a-half times more likely than fathers to have either lost their job or quit since the lockdowns began.

The BBC reported that the “real danger at the moment is that people are starting to associate women with childcare more strongly than before.” Left unchecked, this will impact negatively for women on their career development opportunities.

There is an urgent need for targeted interventions to redress gender inequalities and measures to support working mothers.

The Lancet states: “If governments are truly committed to doing something about gender inequality, they can do so, regardless of what else they have to deal with … The problem is that in most places, there is no real commitment; it is hard to imagine that this pandemic is not going to have a massive, negative impact.”

This has to be a defining moment. There can be no going back to an acceptance of women’s lot being less than that of men.

The experience of Covid has provided us with new and unique opportunities to make the workplace compatible with the lives of women as well as men. To become more flexible, re-establish work-life boundaries, rethink norms around productivity, mental health, and inclusion in a remote setting. The Institute for Fiscal Studies have called it ‘the tipping point for a change in the way we work’.

However, in the ‘new reality’ we also need to ensure there is no further ‘accidental’ disadvantaging of women. Flexible work that supports only the traditional model of women-as-carer could lead to a two-tier workforce. Men present in the office and women at home, slowly and less visibly slipping backwards in their careers.

We need gender-sensitive recovery plans, to address skills gaps for women, to re-commit to the goal of gender equality and resurrect or renew our efforts to achieve this.

We need to shift cultural norms away from women as carers and men as workers. Men are parents too!

Let’s hear the voices of women. Gender expertise built into every facet of society, government, economics can protect the future of women and girls.

Bring an end to this gender blind-spot. The end has surely come for the ‘old normal’, the status quo that devalues women in and by society.