Home / Looks / Style / How fashion has changed in the last century…

History has played a pivotal role in defining fashion, thanks to the varied events that have occurred throughout time. 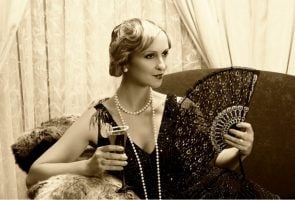 A vivid observer of fashion will tell you that some of the most popular fashions stand the test of time and don’t go out of style, even today.

On the other hand there are ‘fads’, styles popular only for a particular moment, disappearing as soon as something new comes up.

Fashion has undoubtedly changed in the past 100 years. There are a myriad of external influences, such as war and the economy, which profoundly influence these changes. For instance, during the time of the world wars, people preferred wearing outfits that were suitable for wartime.

Fashion reflects the mood of each decade and surely showcases the slow and gradual changes of societies. Let’s run through the past 100 years of fashion history to help us understand fashion at large.

The 1920s and 1930s were the time of the jumper blouse. Jumper blouses were a pretty popular choice and considered perfect for pairing with a skirt.

The blouse was made of cotton or silk and usually had a sailor collar. It reached just below the hips and would go well with a belt.

Then came a low-cut V-neck shirt. These were the well-knitted long-sleeved shirts with rounded collars that promoted modesty.

During the world wars, many people followed military-style fashion. There were shirts with button-up collars that gained massive attention from both men and women.

The 1980s saw an advent of casual styles such as polo shirts and dress shirts. During that decade, sweaters also became famous. Oversized tops were another preferred choice.

Then in the 1990s designer labels started appearing on the streets, a reflection of the wearer’s status. Today, T-shirts have become a standard way of expressing a personal taste and preference by having catchy phrases or pop culture references.

Accessories have seen a varied shift in the past 100 years or so. From 1920 to 2000, some accessories have gone through a tremendous change, while other items such as jewellery haven’t changed much at all.

Hats in particular were extremely popular from the 20s to the 50s and were often worn on a daily basis. For a woman of 1920s, draped hats along with cloches and pokes were a popular style statement.

By the 1930s, 40s, and 50s, varied other styles of hats were popular along with homburgs, berets, and wider- brimmed hats.

Even handbags and purses went through a change in their texture and patterns. The styles of the bags have witnessed a massive change throughout the decades.

The 1920s and 1930s saw women using handbags as vanity bags that featured built-in mirrors and were handy for final makeup touches.

Then, in the 50s and 60s, handbags became more glamorous and were usually matched to the occasion one was attending.

At present we see the handbags and purses have become even more of a status symbol than in the past. Today we have the trend of designer clutches such as the crystal and beaded clutch bags.

Shoes also have a significant place in the fashion world. In the 1920s, the shoes of women would often be considered a mark of femininity. Usually women of this era preferred wearing high and wide heels even with their swimming costumes.

See also  Smoothing out the bumps

During the 1930s, strapped heels and pumps got a lot of attention from women worldwide, although traditional styled heels were still worn by many, while both men and women preferred laced leather shoes for outdoor activities.

In the 1950s sandals, flat shoes, heels and pumps with rounded toes gained massive popularity. White lace up shoes with black leather accents became popular amongst both genders, while it was mainly men who preferred the canvas shoe.

Then followed vinyl boots, loafers with wide heels, wedge heels, and slip-on heel in the 1970s. During those years, sandals and cowboy boots gained a following from both sexes.

In the 1980s, tennis shoes, casual and leather dress shoes became the norm, while working women preferred flat shoes. By the 1990s casual wear was key and gym type sports and athletic shoes were the everyday choice.

By the late 2000, branding became a vital aspect of shoe fashion, which led to branded and designer shoe wear. It became a status symbol to wear brands such as Reebok, Adidas and Nike.

There are plenty of the fashion trends of the 1900s that are still continued in today’s fashion, but with a few modifications to suit general demand.

It’s always difficult to predict what lies ahead in the fashion world the story changes every year; however, we can predict that the colour black will remain on trend for a long time to come. So hold on to that LBD!