My 50th birthday is looming, and I have promised myself that by the time it arrives, I’ll be a lot fitter. 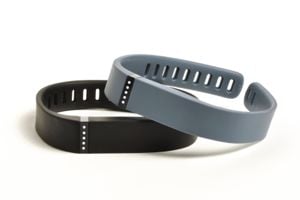 I also need to get cycle fit, as I unwisely said “Yes” when my other half suggested we go in for the Great Notts Ride 50 miler in June, and dropping some weight would make the bike ride more comfortable as well.

Frankly, so far I haven’t seen much progress, so when I saw that Henpicked had a chance to review some fitness items, it seemed like a great opportunity to get a bit of high-tech encouragement.

I chose a Fitbit Flex activity tracker. It’s a more basic model than some on the market, but I don’t really need a second-by-second monitoring of my heart rate – more an idea of how many steps I’ve done and how many calories I’ve burned, so it seemed like a useful device.

It also tracks sleep, which I was very interested to see, as I don’t seem to be sleeping through the night at the moment. I was attracted by the slimline wristband, which looked practical and comfortable compared with some more complex trackers which are like wearing an iPod on your wrist.

It arrived a few days later and looked good – a thin, flexible silicone band with a little gadget that slots into it. There are no instructions, just a web address on a little fold of paper, which revealed itself as I was recycling the box a week or two later!

Having found the set-up page (thank you Google!), the ‘how to’ bit was ok, though not quite as obvious as my menopausal brain would have liked. From it, I discovered that one of the other tiny bits of plastic and metal in the box was a dongle to allow the tech device of your choice to communicate with the tracker, and another was the charger.

I downloaded the app, charged up and was ready to go, bar quite a lot of fumbling to get the wristband to do up.

Since then, I’ve either worn it or had it in my pocket for most of the time. 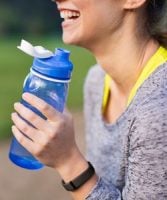 It’s pretty comfortable, which is helpful as you need to wear it on your wrist in bed to track your sleep. The website promises you can even wear it in the shower, (but having tried it, I can only recommend that if you enjoy getting moisture out of fiddly places).

I like the simplicity of the Fitbit Flex’s system to show progress during the day. A band of five lights on the device light up in sequence to show how many steps you’ve done. When you get all five this is equal to 10,000 steps, and you get a congratulatory buzz from the gadget!

Wearing it on your wrist does work most of the time, though not always. At this time of year, I do quite a lot of work with a saw, pruning trees, and I didn’t think about that until the Fitbit buzzed to show that I’d already done my steps for the day, having faithfully recorded each move of my arms as I stood on the spot – so, better to put it in your pocket.

Whenever you want to know more about what you’ve been doing, or to add info, you sync the tracker by clicking on the app icon on your phone, iPad, computer or other device, making sure it’s close enough to make the link. 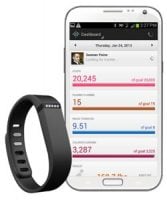 Then you can see how many calories you’ve burned, how many actual steps you’ve taken, and log any food you’ve eaten or specific exercises you’ve done. And it’s easier than you think to get more steps in.

I found the process of adding info quite simple, but the food lists contain a lot of US food brands, which makes finding what you’ve eaten a bit tricky. UK-only food charts are available, and it would surely be relatively simple to have country-specific food lists.

However, this really doesn’t affect me too much, as I mainly cook food from scratch, and it does save any calories you enter, so you can create your own bank of average calories for foods.

One surprise was that, as I’m trying the 5:2 diet, it really helped me to work out, and stick to, 500 calories on the two days a week.

If you want to track your sleep, you can either repeatedly tap the tracker for a second or two when you get into bed, and again when you wake up, or add the data when you sync your tracker. In return, you’ll find it logs how many active periods you have during sleep, so you can see the quality of sleep you’ve had too.

I think it showed me pretty accurately how much sleep I’d had. It was quite reassuring that when I did wake up I drifted off again faster that I’d realised. I actually feel more rested knowing that I slept better than I imagined.

An added extra is the silent alarm. You can set to it to vibrate at a set time and at different times on different days – very partner friendly.

For me, the Fitbit Flex does what I wanted it to. I have a fairly active job most days, so I often reach my 10,000 steps, but it spurs me to do more, and helps me to see how my exercising is progressing. If I lose weight, I can track that too (it might happen!).

Next step is to strap it to my merrily snoring husband at night, to prove to him that he gets a lot more sleep than he thinks.