Anyone who suffers from hay fever knows just how miserable it can be. And while many of us associate it with spring, it’s actually a condition which affects some people all year round. 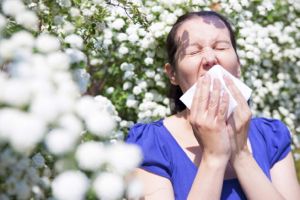 Hay fever is an allergy to pollens in the air. It gained its name from the cold-like illness farm workers got from working in the corn fields, when grass pollens and wild flower pollens were at their peak.

But for some people it can actually be worse in the winter at times of low air pressure when allergens, pollution and particulates in the air hug the ground, upsetting our respiratory systems.

Correctly called Seasonal Allergic Rhinitis, hay fever is an improper immune response to pollen, cat dander, household chemicals, or mould and mildew, which causes the body to think these things are invading bacteria and to act accordingly.

And when this does happen, your immune system jumps up and down yelling “You are pollen”, and releases a load of compounds known as chemical messengers, including histamine.

These chemical messengers tell your immune system to switch on its destruction and removal protocol, which includes swelling nasal membranes and runny nose and eyes, to wash away the irritant, coughing, mucous production and all the lovely symptoms you associate with hay fever.

No one really knows why the body gets so excited about pollen. There is a theory that allergies and autoimmune disease, which are less prevalent in primitive cultures, are a result of our immune systems not having enough to do.

If you have young children, it’s a very good idea to make sure they don’t live in too sterile an environment. Mud pies are good for the immune system. Bleach….not so much.

Why am I sneezing in March and wheezing in November?

As I’ve mentioned, there’s really no such thing as a hay fever season. There are lots of plants that cause allergic rhinitis.

Tree pollens begin in January with hazel and go on till July when the lime tree flowers.

Agricultural pollens start in March and are a problem till mid June, and a variety of grasses (including wheat etc) pollinate between April and the end of August.

Then from the end of August until the end of November you run the risk of fungus, mould and mildew spores. How badly you suffer depends on which spore or pollen upsets you most and how intense the concentrations of those triggers are.

How can I tackle hay fever?

Limiting exposure at the worst times is important. Once you set off an immune response damping it down can be difficult.

You may have found that once your hay fever is really bad antihistamines don’t seem to work. This is because once the histamine is out there it’s difficult to put it back in the box.

Antihistamines need to be taken regularly and ideally before your symptoms start.

However antihistamines can have side effects. Some make you drowsy, not every one works for every person and, as antihistamines reduce swelling they are linked to erectile dysfunction in men. They may also be linked to a reduction in sexual arousal in women (who also have erectile tissue). So if you are a hay fever sufferer and don’t want to fall asleep or have your sex life go down the pan, don’t panic. There are plenty of other remedies out there…

Diet. Some people find that if they go on a radical anti-allergen diet early in the year, cutting out grains, dairy foods, nightshades (potatoes, tomatoes, red and green peppers, chilies) they do not suffer the immune onslaught of late spring and early summer. There’s a theory that gut flora has a strong effect on our immune system and that if we remove other irritants we can regulate the response that happens when allergens pop up.

Common sense. We’ve all seen pictures of people in countries like China and Korea wearing surgical masks in the street. This is not to prevent inhalation of poisons but rather to reduce pollen inhalation. It looks a bit unusual but it helps. However, there are other things you can try:

Bear in mind that if you’re the one with hay fever, you probably shouldn’t be doing the hoovering in your allergy season. Always a silver lining, eh?

Herbs. When your symptoms are at their worst, only a strong herb like Ephedra sinica will work. Ephedra contains ephedrine, pseudo ephedrine and other natural antihistamines, and for this reason is legally regulated and only available from a qualified herbalist. However, if you start early there are lots of other options. Some people swear by homeopathic pollen. I am not a homeopath so can’t vouch for this, but I do know that lots of herbs work really well:

See also  How your pelvic floor affects sex (and other things)

A medical herbalist will probably mix you something a little more complex (possibly brown and strange tasting) to help your symptoms. However, if you start early in the year, with a little self care, some changes in diet and your cleaning habits, and the right herbs from your herbalist, you could have your best summer yet.