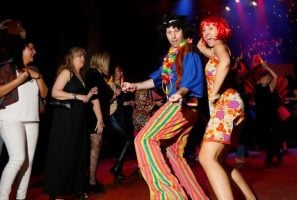 I love dancing and when I hit my 40s I realised that I wasn’t doing enough of it. There was the occasional significant birthday party or wedding or family knees-up but that was about it. Talking to friends I discovered lots of them felt the same way. Some of us decided to go out clubbing in central London but we didn’t even make it through the door. The long queue and the possible humiliation of being turned away for being too old was all too much to bear and we ended up heading home and dancing around my kitchen table instead.

One night I was listening to the radio and Haven’t Stopped Dancing Yet! the 1977 hit by Gonzales came on.

I just thought ‘that’s it’ and the idea of doing my own 70s & 80s soul, funk and disco night started to come together.

In the past I worked as a TV producer so I was used to organising things and had even arranged a couple of school fundraisers but it was still pretty scary doing the first event.

I wasn’t sure what the response would be like and was overwhelmed by the interest we received. I had decided not to put an age to the event and simply said it was, “for people who remember the tunes first time round and still want to party”. We had some local press interest and my phone didn’t stop ringing with people saying things like, “I’ve been waiting 10 years for this!”.

READ  Spring: a season of folklore and feasts

Over 250 people turned up to that first night six years ago and we have been running events ever since at a variety of venues across South East London. Our biggest night of the year is at Christmas when 850 people party at Blackheath Halls. We are also looking to take HSDY further afield. We put on a night in Birmingham in October 2015 and on April 16th 2016 we are doing our first North London event at Islington Assembly Hall. 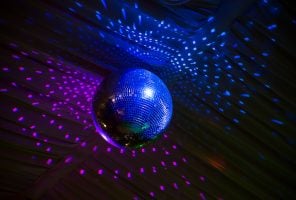 It’s non-stop from the moment we open the doors as you can’t help but dance to soul, funk and disco. It immediately puts a smile on everyone’s faces. I am very lucky to have the most fantastic crew who make it all happen. We have great vinyl DJs and a choreographer who leads routines to Haven’t Stopped Dancing Yet, Car Wash etc to get everyone up and on the floor. My partner, Fergie, MCs the night and my daughters and their friends, who are in their twenties, often help on the door or cloakroom.

There are loads of scientific studies showing that dancing is one of the best things we can do. Not only is it brilliant exercise and makes us feel good, but it can even stave off dementia, so it’s win win I reckon!

There are so many lovely stories from the nights: the couples who have met and moved in together, the group of women who party in memory of their best friend, the widow who has got her groove back after coming to HSDY. We also get families clubbing together: a photographer in his 40s always brings his parents, mums come with their daughters in their 20s, a wonderful woman celebrated her 70th birthday with her daughter and friends at our last event. It’s not about a number it’s about a state of mind and disco appeals to all ages.

Forget about your troubles and dance!

Life in your forties, fifties and beyond can be tough at times with children to bring up, illness, parents getting older and other stresses, so for one night everyone can forget about all this and just dance. We give 10% of profits to Cancer Research. Both my parents and so many of my friends have been affected by cancer and I love the idea that we are partying and helping Cancer Research UK at the same time.

I’m now 55 and while some of my contemporaries are taking early retirement I have become a club promoter. I can’t help but smile when I go and pick up our flyers and posters from the printers on a Friday night. Everyone else is about twenty and wearing a baseball cap but I have always liked to shake things up.

The best bit for me has to be when the night is in full swing and I stand at the back of the room for a moment and just watch everyone having a ball. You can’t beat it.