Home / Happiness / Getting it right the second time around?

Some say we’re destined to repeat our mistakes. Others say we learn from them. Let’s be thankful for a second chance. 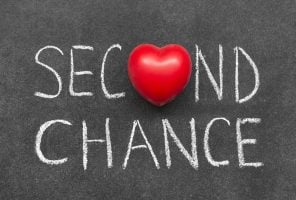 I like to think that my first marriage was just a trial run for the proper one. First time around I wasn’t ready. Some people are mature and balanced enough for a grown up relationship at 16. I hadn’t a clue.

Not that I got married when I was 16. Oh no. I ventured into the register office at 30, pleased to be wearing a lovely dress (shocking pink by the way, with long black gloves, a 50s style hat, and sunglasses) but not particularly fond of the man I’d ended up marrying.

We all make mistakes. Some are bigger than others.

I’d yet to learn that real sustained kindness was important. Observing my mother being kind and charming to strangers but treating my dad like an irritating member of staff, I’d picked up some bad habits. I brought them all with me to university, to my working early life in London, and into the house I shared my boyfriend.

Before you feel too sorry for him. we were both as bad as each other. From his father he’d learned that it was essential to dominate.

He believed I would respect him if he was right about everything. The logical corollary of this was that I always had to be wrong. I gradually formed the view that he was a right pillock. Moving swiftly on, six years later, I was happily living alone. I’d loads of friends; I went out dancing tango on Saturday nights, or I stayed in. I’d got to the point where I didn’t mind. I wasn’t looking for a life partner, or even a date. One day, at a wedding, I met a really lovely man.

I’d written myself a list of 20 things I thought would make a good partner. It turned out that he had one too.

The top three were these:

We’d both based our lists on learning from our mistakes and deciding not to repeat them.

He’d got a reputation for being unable to commit. This was entirely wrong; he was entirely happy for us to be Velcro’d, just not Superglued.

We were pretty much together from day one. And after four years of happily hanging out in my flat – him, me and a cat we’d acquired by accident – he sort of suggested that we get married.
It was difficult to tell if it was a proposal or not. It was my birthday, we were on holiday, and he gave me a ring then smiled but didn’t say anything. (What if it was just a birthday present?)

Honestly? I was terrified. What if I screwed up again?

So I thought about it. Here was the nicest man I’d ever met. But how would I make sure I wouldn’t go off the rails? What if it all just rolled to a halt? It wasn’t a question of behaving differently from the way I had in my earlier relationships. That would just be the same train on different tracks, still heading for the ravine. (Sorry about the train metaphors.)

So here are my guidelines for how to:

That and remembering that it really doesn’t take much effort to keep a nice man happy. I’m very interested in myself, so I make sure I stop and ask what I can do for him everyone now and again.

So far, nine years in, we still seem to be rubbing along nicely.

And although I could perhaps have had a different life, and been happier for longer, there’s no point worrying about it. I’m happy at this moment, and that’s the only one I have any say in.