Home / Work and money / Careers / Getting girls switched on to science

Patricia Woodhouse, Headmistress, Malvern St James, has firm opinions on how we can spark an interest in science that lasts a lifetime? 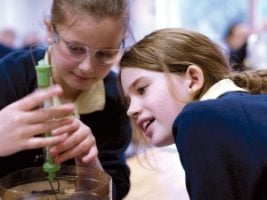 “It is more than 35 years since the Sex Discrimination Act came into force and 42 years since the introduction of the Equal Pay Act. Since this legislation was passed the number of women in the workforce has increased dramatically; yet in many areas large inequalities still remain. According to the UKRC* this is particularly true of the science, engineering and technology (SET) sectors where the proportion of women in technical roles remains low.

It seems that these sectors still remain dominated by men – but why? Are women victims of an outdated perception that these sectors are male domains? Does this stem from a lack of girls studying science, engineering or technology at school and are they uninterested or put off by these subjects for some reason?

An extensive recent study done by Louisa Kiwana, Dr. Anil Kumar and Neil Randerson from Engineering UK in April 2011, identified three major themes affecting the uptake of SET subjects at school and subsequently pursuing a career within these areas by girls:

• Girls are effectively ruling themselves out of a degree in engineering by the age of 14
• Enjoyment of a subject is as significant as attainment in terms of a pupil’s likelihood to pursue that subject further
• Careers information, advice and guidance is still reinforcing gender stereotypes

The study showed that girls’ enjoyment levels in particular, ranked significantly lower than boys in SET subjects and as such has a direct impact on their subject choices for GCSE and A levels.

During my 25 years of experience working in top girls schools, including seven years as Headmistress of two, the girls we have taught have been actively engaged in SET subjects. This is not down to an automatic exemption from the common issues previously highlighted; it is a reflection, rather, of a lifelong commitment to promoting girls’ abilities, understanding and enjoyment in these SET subjects.

I still meet the perception that schools encourage girls to favour the arts and humanities subjects over science, maths or engineering. SET subjects have also suffered from an ‘uncool’ image in the past. Recent popular television programmes such ‘Bang Goes The Theory’ and ‘Rough Science’ have helped change this image. Bringing popular culture into the classroom has enlivened science lessons and made it relevant, not least to teenage girls.

As well as embracing popular culture, it is also essential to nurture the interests your pupils may have outside and bring them into school. This year, one of our younger girls took part in, and won, a national competition to design a Mars rover; she did it for her own enjoyment and interest. As a school we whole heartedly embraced the enthusiasm of this girl’s curiosity in space travel, which spread infectiously amongst her peers and led to our involvement in the national programme Mission X and a visit from a prototype Mars Rover.

All the girls here are given every opportunity to involve themselves in a range of science and technology activities, designed to engage and inspire them; including National Science & Engineering Week, as well as lectures from former students and eminent scientists. Never under-estimate either the impact of modern, first-class facilities on children’s enjoyment and therefore understanding – it is well worth investing in dedicated state-of-the art Science laboratories.

In my experience, a cohesive cross-curricular learning approach clearly demonstrates to the girls the reach and influences that science and maths have into all subjects; and vice versa. Teachers are vital role models; the more staff work across departments and explore the links between subjects such as biology and latin, chemistry and food technology, the more the girls appreciate how SET subjects complement and inform their curriculum. This in turn helps the girls appreciate studying science is not ‘unusual’ and certainly not geeky.

At MSJ we have taken this integrated approach to another level; it is reflected in the physical layout of our buildings, with our maths and science blocks, art & design studios and Drama centre facing around each other within a spacious quad.

Culture of curiosity and learning

From my experience, girls can be reticent in a classroom situation, feeling that they should only speak when they know the right answer. Fostering a spirit of curiosity and ‘risk’ taking is therefore of great importance. The earlier you start helping girls understand that it is not a question of waiting to give the ‘right’ answer but, rather starting the discussion to find it which is important, the better. Not knowing is not a problem – not wanting to find out is! This culture is possible at MSJ because our teaching and curriculum is not driven by the need to top league tables, but rather to offer the best learning environment.

As an independent school we do have more flexibility and can therefore enjoy a more bespoke approach, tailored to the needs of the girls rather than ticking boxes. It is also important for teachers to embrace this culture of curiosity as well; we need to continue to question and to learn alongside each other and our students.

Encouraging the take up of SET subjects in school is one thing – the second step is to raise the profile of the highly qualified women I have met who have indeed moved into and work very successfully within the industry.

MSJ has recently made valuable links with a local company, Malvern Instruments, who have clearly invested in women scientists, engineers and technologists to deliver their economic success as well as bring a much needed social awareness. The new partnership will offer our students access to mentoring support and degree sponsorship. Only with such investment will our country have the supply of world-class skills it needs continue to compete in global markets, regardless of gender.

See also  Why employers need to start caring about the menopause...

*About UKRC
The UKRC is the UK’s lead organisation for the provision of advice, services and policy consultation to build gender equality and diversity in science, engineering, technology and the built environment (SET).

The UKRC work with employers, professional bodies, education institutions, women’s organisations and networks, policy institutes, sector skills councils, the government and many others to promote gender equality and diversity in these key sectors. They offer tailored services and support for women at all career stages.

The UKRC leads WISE, which works with employers, schools and others to inspire girls and young women to take up STEM careers.