Home / Time off / Home and garden / Freezing clothes: does it really work?

I’m sharing this because at first my friends thought I was crazy, then they tried it and it worked for them too. 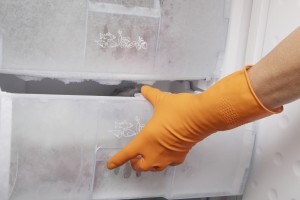 Tried what exactly? Well, instead of taking my clothes to the dry cleaners, or putting them in the wash, I freeze them.

Just to be clear. I don’t mean my full-on loads of washing. Mainly the things I’d dry clean and jeans.

I started doing this after I read an article that said you shouldn’t wash expensive jeans because they fade and you shorten their life.  And I’m in good company – apparently Levi’s CEO Chip Bergh said that he hadn’t washed his Levi’s 501s for a year.

It doesn’t get rid of dirt, but actually it’s often that they’re not as fresh as I’d like rather than dirty anyway.

On top of that, I don’t like that jeans feel tight on the first wear after washing.

And I’ve come home from a restaurant smelling of the food and found freezing got rid of odours in otherwise clean clothes. So, this freshens them up and is supposed to get rid of some of the bacteria, or as much as washing.

I’ve been doing it for ages now. I’ve tried it with jumpers, dresses, tops and jackets – my freezer drawer’s not big enough for coats. I was a bit nervous the first time I tried this with one of my nice dresses – not as hardy as denim – but it worked fine so I tried experimenting with other fabrics.

What the science says…

This depends on what you read. I read an article about an experiment where a student’s non-washed jeans were compared with jeans worn for only three days. Both had the same amount of bacteria. It concluded that it’s not hazardous to health.

Some say that any bacteria is dormant rather than killed, so the clothes will be the same as before when they warm up. Personally I haven’t found this, they’ve been fresh and crisp. 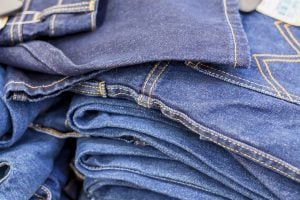 Then again, I read that washing doesn’t remove all bacteria either – it’s hardy like that. Bacteria, skin cells, and sweat are transferred to our clothes from our own body but skin microorganisms are generally not hazardous to ourselves. But there are situations when your clothes must be sterile.

So I think common sense is important. I always wear undies with my jeans, I don’t have smelly pits and I don’t come into contact with anything hazardous or full of bacteria.

Here’s what I do:

I wouldn’t try it with very delicate fabric like silks, but if you do and it works let me know!

Of course this isn’t for you if you love the smell of your washing powder and fabric softener. But I’ve saved myself washing, ironing and money getting things dry cleaned.

Have you done this? Or would you try it? I’d love to know how you get on…