The Chaîne des Puys is a group of 80 volcanoes aligned to the Limagne border fault in the Auvergne Volcanic Park in France. They run north to south on a strip 3,5km wide and 45km long and are unique in Europe. A dossier is being submitted to UNESCO at the end of the month to ask for inclusion in its worldwide site list under the natural section and achieving this status would mean it would be viewed as having an “outstanding universal value”. 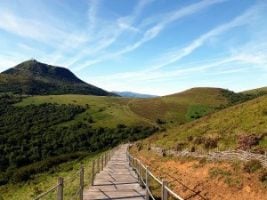 One of UNESCO’s missions is to encourage the protection of patrimony in countries and there are currently 962 sites worldwide made up of 745 cultural, 188 natural and 29 mixed sites.

France has 38 sites of which 3 come under the natural banner – Réunion Island, the lagoons of New Caledonia and the Porto Gulf in Corsica. However, if the candidature is successful, it will be the first natural site within mainland France.

It is already classed as a natural site of exceptional quality by the State but gaining the UNESCO classification would guarantee long term conservation and acknowledge its exceptionality. It would also encourage and develop research nationally and internationally in the fields of geology and volcanology and provide responsible tourism. 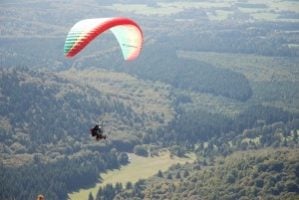 The site is particularly interesting for several reasons. Firstly, it is the youngest volcanic chain in mainland France, having been formed between 95,000 and 8,400 years ago. Its landscape reveals information about its formation, and has played a vital role in the study of volcanoes since the 18th Century.

The fault line was a result of a continental rift over 40 million years ago and the way it lies means the surrounding areas haven’t been developed, as it acts as a natural limit to the growth of urbanisation. Not such a bad thing maybe in this day and age?

You might think volcancoes can’t really be too interesting, but living here, where they form the background landscape, and a stunning one at that, I can’t help bu feel otherwise. I always feel I am home when I see the Puy de Dôme in the distance.

It is considered the emblematic landmark of these volcanoes, and at 1400m it is also the highest. Weather permitting, I look at it every day from my bedroom window and even had a floor plug put in the lounge so I can iron and see it at the same time!

The Puy de Dôme has the ruins of 2nd century temple at its summit, built in dedication to Mercury, the god of travellers and commerce. It attracts thousands of visitors annually as does the area in general for its walks and sporting activities, such as paragliding.

Well worth a visit

The Puy de Pariou’s crater is formed by two craters, one inside the other and all of it is covered by grass, even the interior. When you reach the top you can walk around the rim and then descend 200 metres into its centre. It is not uncommon to see people of all ages lying on their backs on the ground looking upwards -it seems to be the thing to do when you are there.

The Puy de la Vache – volcanic cow hill – and the Puy du Lassolas are twinned craters and the Gour du Tazenat is water-filled and over 60 metres deep. This one marks the northern limit of the Châine and is at least 290,000 years old. It is a short drive from my home and I often suggest seeing it to visitors, as it is a perfect example of natural beauty in the area.

The 700 page dossier is due to be submitted in June and a group of experts will be visiting the area in the autumn and spring to evaluate it with the result being given next June. Over 30,000 have already signed the petition supporting its application. Fingers crossed!

If you would like to find out more and maybe add your name to the petition, please visit the official website.