Home / Health / Dying, death and bereavement / Final goodbyes in the chapel of rest

Dee Montague offers a moving insight into her visit to see her brother in the Chapel of Rest. 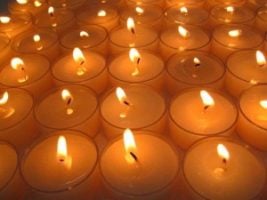 I’ve been thinking long and hard about whether it’s wise to document this. Whether I actually click the ‘publish’ link after writing it, I haven’t yet decided. I’m not sure if it will be helpful to anyone, or a step too far. I do know it will probably make even more people cry. I hate making people cry.

The fact of the matter is, death is part of life. We will all die at some point, and we will all more than likely lose someone close to us. Nearly everyone I know has experienced bereavement, yet it remains one of the greatest taboos. People don’t talk about it.

No one could prepare me. No one could say anything that somehow made it better. Don’t get me wrong, people tried. I could write a list as long as my arm (ok, probably longer than my child-sized arm) of things you shouldn’t say to a bereaved person. Perhaps I should write that list…where to start? ‘At least he’s not suffering anymore,’ I’d have preferred him not to have suffered at all thanks. ‘At least you had time to prepare; you knew it was going to happen.’ Of course, watching someone you love go through the pain and suffering, experience horrendous ‘treatment’ in the hope of getting better and watching them deteriorate over many months is not at all torturous. ‘You really should be getting over it by now…’ I could go on. I probably will go on, in another post, on another day.

There was part of the process that I found very difficult, purely because there was nothing anyone could say or do that would prepare me for it. A few days before your funeral, I went to see you in the Chapel of Rest.

I don’t remember as much as you’d think. I remember being in the reception area of the funeral directors trying not to laugh as I remembered the funeral arrangement scene from Big Train (still one of my all time favourite programmes to have ever graced my TV). The men who run that place (the one on Cotterell Street, not the one on Big Train) were brilliant; so kind and conscientious. They knew none of us had a bloody clue what we were doing, or what we should do. I had written you a letter. I don’t remember too much about the content. I wrote it in blue scented ink and put glitter and silver hearts in the envelope, the plan being that when you got to wherever you go, you’d get covered in glitter when you opened the letter from me. Not only did I always insist on having the last word, I was delighted to squeeze in a final prank.

READ  Dealing with death and dying

I think one of the directors spoke to Dad, and somehow he decided what order we saw you in. I don’t remember the order. I just remember that as the wait for my turn got shorter, my palms became sweaty as my whole body shook; I could barely breathe and I was genuinely worried and scared about seeing you in there. Then Dad told me I could go into the room. He asked if I wanted him to come in with me; I said no, I would be ok to go in on my own. Thankfully, he ignored me and walked in behind me with his hand on my shoulder. Bloody good job really, because when I saw you, my legs turned to jelly and I burst into tears, sobbing for a good while. Well, it felt like a long time; it was probably a minute. I didn’t collapse, mainly thanks to Dad holding onto me.

You looked like you, but very different. You were already bloated from the steroids and drugs that had been pumped through you for the last 12 months but you looked bigger. Your skin tone looked blotchy. You didn’t look like you were asleep like people said you would; you were so obviously dead. I know that’s a very harsh thing to say, but it’s true and I don’t think it’s of benefit to anyone to dress it up; it wasn’t to me. But you genuinely looked so peaceful, and that is something I take comfort from to this day. I don’t think there is any clear way to describe how ‘peaceful’ looks compared to someone who is asleep, but there is a real difference. I guess the truth is, no one can prepare you for what their loved one will look like or how you will react.

I seem to remember Dad leaving me alone with you for a while. I can’t remember if Mum was there or if we just talked about it after and now it feels like she was, but I know I was on my own for a few minutes. I told you how much I loved you and would miss you, and also apologised for not telling you that often enough when you were still here (I don’t think we ever talked about death, even though we knew it would happen). I put the letter in your pocket of the fleece jacket I remember being pleased that you were wearing; you wore it a lot because it was cosy and didn’t irritate your skin, and I thought it would keep you warm on the way to wherever you were going.

READ  Good from bad: Julie Bailey and her quest for the truth

I ignored the very real worry that I might knock you over and leant over to kiss your forehead. As a result I was instantly traumatised about how cold your skin was. It was like nothing I have ever experienced. When you stand outside in the cold, or you play in the snow or hold frozen food for too long, the cold is numb and painful. There was no pain and no numb feeling to be had, just extreme cold. I knew that would take some time to deal with. I felt like my heart was breaking into pieces as I realised that I would never see you ever again. I took in every detail of your face and committed it to memory, very careful not to let that become the defining image of you. I don’t remember too much after that but I wish I had spent a little more time with you. Still, there’s not a lot I could have gained from that.

A few days after that – whether it was before or after your funeral I don’t know, I think it was before – me and our sister decided to go swimming. As we walked over the bridge crossing the river to the pool, we discussed what it had been like to see you in there. I was rather quiet as she spoke, as I was too scared to tell her about the thing that had upset me the most in case she thought it was wrong or nasty in some way. Until she said ‘I can still smell it, it’s like it’s stuck in my nose and won’t go away.’ I was suddenly talkative as I told her I had been putting vapour rub around my nostrils when I was on my own to try and get rid of the smell. Horrible thing to discuss really, but it wasn’t a smell of decomposition or anything nasty; Mum later said that it was probably a combination of all of the drugs they had pumped into you in those last few hours. That made sense to me. I can’t stress enough that it wasn’t a horrible odour; it was just a clinical and peculiar smell that I had never experienced and although I remember it well, I haven’t since. I can still sense the utter relief I felt as our sister spoke that I wasn’t the only one who had found that part very difficult to deal with.

Whilst I know this has has been challenging to write about (and will quite possibly have anyone reading it crying like a small child), I feel it is really important to somehow share that experience via this blog with other people, especially if they have experienced the bereavement of someone close to them. I am absolutely sure that visiting you after you died was a very positive thing to do. Not only did it give me an opportunity to say goodbye, it helped me understand that it was real and that I needed to try and come to terms with it – not get over it, but understand what was happening as part of that final process.

No matter how different you looked, how devastating it was to see you there, it was something I had to do for me and for you. As my big brother, my hero, I felt I owed it to you to come and say goodbye to you in person and make sure I sent you on your way with that envelope full of love and fond regard. No regrets then, and absolutely none now.

With thanks to Dee Montague for permission to share this entry from her blog, If It Wasn’t For Bad Luck, Letters to my Late Brother. If you would like to read more of Dee’s letters to her brother, click here.