Skin is a wonderful British/South African film made in 2008. It focuses on the huge complexities of being born mixed race to white parents in South Africa during the apartheid era and is based on the true story of Sandra Laing. 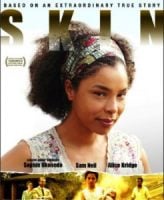 The fortunes of the main character do not make for happy reading; she is rejected by both black and white communities and ultimately by her parents themselves, though there is in the end a reconciliation with the mother.

Sandra’s only friends for much of the time are her children. The boy and girl are fathered by Sandra’s black husband with whom she falls very much in love at a very young age, but who treats her shamefully and violently, such that she takes the hugely courageous step of leaving him, walking away with literally nothing.

There is hope at the end of the Skin mainly due to the incredible strength of Sandra’s spirit, which is absolutely humbling. Not a blockbuster, but a film absolutely not to be missed.