We have all had colds. They are generally unavoidable, usually caught from hand contact rather than droplet infection. 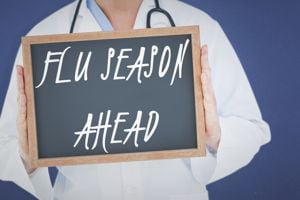 You touch a door knob or a phone that an infected person has touched then you rub your eyes and voila! In it goes.

However, comparatively few of us have had genuine influenza (flu), though this is generally caught in the same way.

Symptoms of a cold:

A cold will usually be over in around five days. Flu will generally leave you feeling exhausted and finding it difficult to cope for several weeks, possibly longer if you have been very ill.

A doctor once described flu to me in this way: You know you have flu when you are told you have the winning lottery ticket but would rather stay in bed than collect your winnings.

Flu can be a serious illness for some people, including those:

If you are immune compromised or suffer a long-term illness it is worth talking either to your doctor or pharmacist about the flu vaccination or a qualified herbalist about immune support.

This is because people who are already unwell are more likely to suffer complications, such as severe respiratory problems.

How to treat flu

Doctors usually recommend paracetemol or ibuprofen to bring down a fever and to reduce the discomfort. However, it has been shown that suppressing a fever can make flu last longer, and ibuprofen is being shown to interfere with the natural resolution of inflammation – an important part of our immune defences.

Essentially, unless your temperature is dangerously high, consider leaving it alone.

Elderberries have been extensively researched for their ability to prevent flu. In a Norwegian study [1] a group of people suffering flu symptoms were given an elderberry extract and were found to recover significantly more quickly than those taking a placebo. 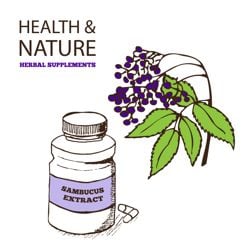 Another study showed benefit from taking an elderberry syrup [2] and there are many other studies showing value for a proprietary extract called Sambucol which is available in health food stores, pharmacies and supermarkets. [3]

It’s hypothesised that the natural blend of vitamin C, bioflavonoids and anthocyanins (the blue pigments) act to damage the virus and prevent Haemagglutination – a process where the virus sticks to the wall of human cells in its bid to infect them.

Make your own elderberry syrup

Your local herbalist can also help you find immune-boosting answers to the inevitable winter bugs.

Flu is miserable, no two ways about it, and thanks to the not-so-humble elderberry, prevention is definitely better than cure.