Stephanie Sergeant discovers how one woman went from air hostess to neuroscientist and realised that it is never too late to start learning. 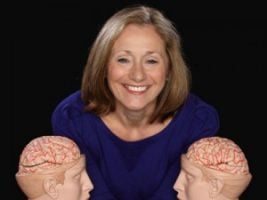 In the Seventies Dr Lynda Shaw was an air hostess, flying high in the skies for British Airways and loving the adventure. Today she is one of the UK’s most respected neuroscientists, specialising in youth and ageing.It is fascinating to learn how someone who left school at 16 with a bundle of O-levels, and believing that she was limited in the brains department, has now reached academic and scientific heights that would give most of us vertigo.

So how on earth did she make such a dramatic career shift? The answer is by means of an incredible journey which included: posh nosh for city types, a Lotte botty, a Buddhist temple, two babies and personal grief that changed her life.

“I didn’t like my school in West London – I had no interest in learning there and completely believed I was not very clever. I left and trained to be a secretary, but all I wanted to do was travel,” says Lynda. Her last secretarial job was for BA at Heathrow and the sight of the air hostesses coming and going, obviously having the time of their lives, led 19-year-old Lynda to apply. In 1977 she started as a BA air hostess: “I spent every penny I earned whilst travelling to Canada, Africa, Russia, the US, the Caribbean, Australia, the Far East and Middle East. In those days crews got a lot of time off so life was a ball.”

Four years later Lynda left the high life and started a catering company, Thyme to Eat, in London with another ex-stewardess, despite her dislike for cooking. “We catered for events in the City and within one year we had made over £100,000, had two vans, waitresses, cooks and premises.”

After two years they closed the business while Lynda trained to become a Lotte Berk exercise teacher. “Now she was a fascinating woman,” says Lynda. Lotte Berk was a dancer, a Jew who escaped Germany in the 1930s with her English husband. In London, ballerina Lotte was told she might never walk again due to severe back problems, and so developed a method of exercise based on ‘core stability’ and taught it until her death in 2003. “I can spot a Lotte botty a mile away,” says Lynda, who is living proof that the Lotte Berk method keeps your body youthful

In 1984 Lynda and her husband David started a health club in West London called Flix. “We renovated the rear of an old cinema, put in two floors and had 2,000 members and 20 staff,” she says. “It was really successful, but in those days interest rates were 15% and we struggled with cash flow. After two years we had to close. The electricity company chose the coldest month of the year to charge a deposit which we could not afford. I went back to teaching Lotte Berk until my first child Francesca was born in 1988.

Her son Michael followed in 1990 and Lynda became a personal trainer, until her life changed forever in 1997 when her father died suddenly.

“A few months after Dad died I was standing at the school gates when I overheard another Mum talking about going to the Himalayas,” explains Lynda.  “My father loved the Himalayas and often urged me to go.” So, one year and three days after her father’s death Lynda flew to the Himalayan Mountains. “Whilst there, on Dad’s birthday, my friends arranged to open up a Buddhist temple for a special ceremony – it was the most profound experience of my life.  I was totally blown away.  When I came back to the UK, all I wanted to do was to go back to the Himalayas and I spent a lot of time staring at candles!  Sometime later I ‘woke up’ and realised I was not being fair to my family, and to bring me back to reality I dragged my sorry self to night school to do an English A level.”

At night school she realised a love of learning and applied to Brunel University to study Anthropology and Psychology. On the four year sandwich course, Lynda found that psychology, specifically consciousness and the processing of emotion, was her calling and  went on to complete her PhD in Neuroscience.

Today Dr Lynda Shaw is a Neuroscience lecturer and researcher on brain function and impairment. She is a registered chartered psychologist with the British Psychological Society and a Fellow of the Royal School of Medicine. As an entrepreneur and author she applies her knowledge to the business world helping CEOs, team leaders and managers achieve cohesive working environments, particularly managing modern age-diverse workforces more effectively.

Look out for Lynda’s up-coming articles in t4w, and in the meantime ponder on these words: “My dad’s death was the catalyst to going to university, where I re-discovered a love of learning. Everyone is capable of learning, even if you think you are not. Because if you are drawn to something and if you love it then you will naturally practise it and improve – and activating all those extra neural pathways will result in areas of expertise you would never have imagined.”

Take everything a step at a time and if it feels right, do more of it.