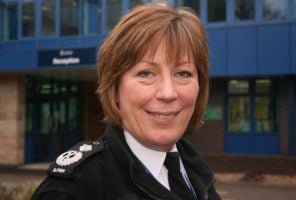 The departing Chief Constable of Nottinghamshire Police has been a champion for women, both on the force and off, implementing some major new policies and tackling some previously taboo issues. Impending retirement isn’t going to stop her though – she plans to continue being a force for good for women everywhere.

So how does a woman reach these dizzy heights and achieve so much?

Sue graduated from London School of Economics in 1986 and joined Nottinghamshire Police in the same year. She has been married to James for 30 years and is a proud mum to Tom, Emma and Georgie and is grandmother to Poppy.

After moving up through the ranks to Chief Inspector, Sue was seconded to HMIC Cambridge. Her career took her to the West Midlands, back to Nottingham, the Met and saw her appointed Chief Constable for Nottingham in 2016.

During her career, Sue received three Chief Constable’s Commendations for professionalism, dedication and courageous leadership, a testament to her inspirational work. And when you consider that back in 1986 only eight per cent of Nottinghamshire’s officers were women, her achievements are even more remarkable. She says: “It was a teacher from school who inspired me the most. He said I would have to work harder and be smarter if I wanted to succeed and I believe this to be the case.”

Her work in supporting and enabling women within her profession is groundbreaking. She was instrumental in bringing part-time and flexible working to her force and set up a female focus group for employees to talk about their experiences – with a view to making necessary changes.

And with women much more prevalent in the force – and many working into their 50s and 60s – she has developed menopause in the workplace policies and practices to support women going through menopause as well as to educate and inform their male colleagues.

Making a difference to colleagues and friends 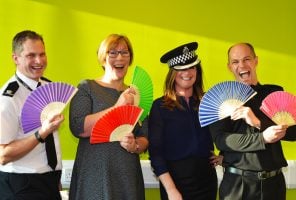 At Henpicked, we’ve had the pleasure of working with Sue on our Menopause in the Workplace training, and we’re looking forward to continuing to do so. But we’re not the only ones who love working with this lady… here are some messages from colleagues and friends on her retirement:

“I will always treasure your wise counsel and determination to put people at the heart of our plans.”

“What an absolute pleasure it has been to work with such an inspirational woman! … you will leave this Force a better place, more accepting and better represented as well as leaving people like me and other colleagues who have watched what you’ve done and will gladly follow in your footsteps.”

READ  Good from bad: Julie Bailey and her quest for the truth

“You have been a beacon of support to Stonewall and everything we strive to achieve. You have demonstrated the kind of dedication, passion and thoughtful leadership needed to ensure that everyone is free to be themselves and accepted without exception.”

“I feel deeply privileged to have worked alongside you; your intellect, your thoughtfulness, your determination to do the right thing and your obvious passion for policing have all stood you apart. You should be proud of the difference you have made across a number of Forces, but also in your national roles.”

“It’s been an absolute honour and a privilege to have worked alongside you on the misogyny hate crime work. I think you shatter every commonplace misconception of ‘what the police are like’ and I admire your passion for equality and public service (in the truest sense).  As I’ve said before, Nottinghamshire Police didn’t have to do this for women – it would have been easier to wait for someone else to take the lead. And for you, at the very end of your career in the Force, to take the harder path, the path less travelled, says a lot about your character.”

“Thank you for showing me what we women can achieve.”

READ  The secret of success: interview with Heather Gorringe of Wiggly Wigglers

“I recall you speaking about your experience of being a mother and managing your career. You spoke highly of your husband and family supporting you. I distinctly remember you saying as mothers with careers we must not feel guilty in not being with our children all the time. It’s about enriching their lives when you are with them.”