Home / Happiness / Family / Empty nest syndrome: how does it feel?

It’s a time which many parents approach with mixed feelings. You want to protect them forever, but you also want them to have their own independent lives. 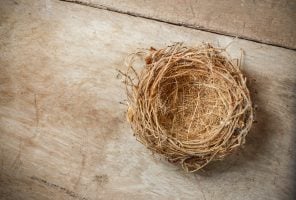 So is empty nest syndrome real? I’m halfway to the empty nest. One chick moved out last year and I have another little chickadee who is coming to the end of her school years.

I can remember a time when I stood in the kitchen of a dear friend, listening to her cry as she told me of saying goodbye to her first child.

My son was only a baby at the time, but tears welled up in my eyes even then. I could literally feel her pain and I knew it was an emotion that I would eventually have to experience.

You hear people say, “I blinked and they were grown!” Actually, it wasn’t quite like that for me. Between my two kids, I spent six years as a stay-at-home mom and I always say that I felt every one of those years.

But then they were both in school and somewhere about that time everything sped up. Yes, I’ve blinked and yes, they’re grown.

Recently, I gave a talk at my daughter’s school to parents whose children were just about to leave (I was between school-leaving children at the time). I could share my experiences and keep my emotions in check, while the graduates’ parents were just too frazzled and emotionally drained to handle it.

It won’t be long until I’m in their shoes once again. It’s hard to face the unknown, especially when it comes to your babies. Yes, my kids will always be my babies.

But you know you have to do it. I mean what’s the alternative? You either raise well-adjusted kids who are ready to conquer the world or you have fearful kids who are too timid to leave the nest.

Here’s the good news. Parents have been raising kids for centuries and for most of that time they raised them in a world without phones, internet or social media. The bad news is that every parent has to walk the road and work things out on their own terms.

Enjoying our special times together

But I do have one piece of advice that really helped me during my son’s last year at home. A friend had shared how hard her first son’s last year was for her. She said that she mourned every family celebration as the last… it was their last summer holiday, their last Christmas and their last Easter.

She told me she cried a lot that year. In the end, she realized that she had cheated herself out of those special memories, and advised me not to make the same mistake.

I took her words to heart and lived every moment with my little family of four. I spent little time memorialising moments – instead I just enjoyed them for what they were.

Eventually, the year did come to an end and the grief did come. Then, I worked through it as best I could. I cried and laughed and cried some more, but I had no regrets.

My son has finished his first year of college and my daughter will join him soon enough. Time brings healing and lends perspective. I have worked through his absence and my heart is no longer as raw.

READ  The secret to happiness is to love your life

And yes, I still have my moments and probably always will.

Soon, I will have to do it all over again with my girl and I figure it will be just as hard. I’ve been there and experienced it once already, but she’ll be just a little different.

As parents we love them as individuals and we lose them that way too. But we’ll always be a family and I’ll always cherish the years we spent together…