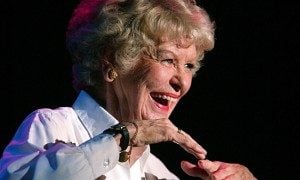 I crossed paths with the redoubtable Elaine Stritch several times over the decades, each time more memorable and poignant than the last. She had that certain “je ne sais quoi” quality about her. You wanted to be near her because she made the moment more intense, more vibrant and alive; and perhaps every so slightly off kilter.

I was supposed to interview her. Sit across from her, face to face, and ask her questions. In the end, I wonder if I would have been able to do so. Make no mistake, she terrified me; only because I feared falling short of her standards. By the time I moved to the Detroit area, life had other plans. “Elaine had,” as Bernadette Peters said yesterday, “on her terms, had left the building.”

Yesterday afternoon, at 4 p.m., at the Al Hirschfeld Theater in New York City, friends of the late star gathered to pay tribute to a woman unlike any before her, or to ever come again. Elaine Stritch, who passed away in July, at the age of 89, had been on stage for more than 60 of those years.

Actor Nathan Lane, fought through tears to open the two-hour event, in a brilliant monologue as biting, as it was elegant; just like Elaine, herself. He regaled those in attendance with moments and memories of his friend. A woman, cherished for her exacting honesty, as much as her incredible warmth. She came to see Lane during his performance of The Addams Family on Broadway and chided: “Whatever they’re paying you, it isn’t enough.”

Columnist Liz Smith, spoke of her friend of over sixty years, calling her a “national treasure.”

One by one, a parade of some of the biggest names in New York Theatre took the microphone to commemorate Elaine Stritch. To collectively embrace her one last time, in the presence of others who, like us all, adored her.

Bernadette Peters performed Elaine’s song, Civilization, from Angel in the Wings (1947). After which, when speaking she said, through choked tears, “I had the great privilege of being her friend. She was my friend.”

Hal Prince described her as a “Brilliant actress who often starred in musicals.” Prince, who directed Elaine in “The Ladies who Lunch” said with deep honesty, “and no one has ever come close to matching her.” 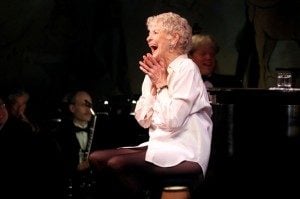 Mitchell, Joy Behar, among others.

Elaine Stritch affected you. You would not be the same after experiencing her, and that sentiment was universal – whether you were friend, fan, or just someone she met along her travels.

“Elaine, you were a real character, like they used to make.” Liz Smith said. “They don’t make them anymore.”

“Everybody Rise: A Celebration of Elaine Stritch” was brought to life by George C. Wolfe (Wolfe directed Stritch’s one-woman show, At Liberty”) and a portion of contributions made during the event are to be donated to the “Elaine Stritch Scholarship Fund at the Stella Adler Studio of Acting.”