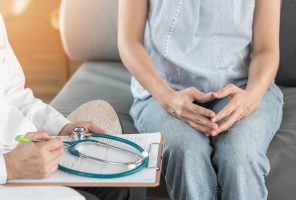 Actively deciding to go into menopause in my late 30s might sound rather drastic, but for me it was the end of a very long journey.

Years of pain, misery and surgery took me to taking this decision. And I’m glad I did.

Rewinding, I’d suffered from endometriosis since I was 17, and had multiple keyhole surgeries on my cervix. In my mid 20s I had a Mirena coil fitted. Although it took about a year to settle in, for the first time since having periods I felt like I also had a life. I was able to work and generally enjoy myself more.

After five years it needed replacing, and my agony began again. It felt different this time. I waited it out for a year, but it just wasn’t settling. Eventually I was sent for an x ray and they said the coil wasn’t there! But they said not to worry. My mum works as a gynae nurse and she was concerned, but I trusted the consultant.

Too much, it seems. I ended up collapsing, and a CT scan found that the coil had torn a hole in my womb and was poking the back of my bowel. I had surgery to remove it, but I couldn’t have another one fitted.

The consultant who performed the surgery suggested a chemical treatment initially, to bring about menopause. But after about a year, it was clear this wasn’t working either. He said that essentially my cervix and womb were ruined, and asked how I’d feel about having them removed. By this point I was desperate, and so fed up being poked and prodded.

READ  Menopause and HRT: what you need to know

It’s important for me to say this. As well as endometriosis, I also had adenomyosis. This is where the inner lining of the womb pokes through the muscle wall. And I had a pinhole cervix. There was an awful lot going on, and I don’t want to scare anybody thinking that endometriosis will lead to this. But for me, this was the decision to consider.

It was a tough one. I was 38 and didn’t have children, and I knew that I could never be a candidate for IVF due to my conditions. The hole in my womb meant even if an embryo could be directly implanted I’d be unlikely to carry a baby. What I wanted was for someone to tell me, unequivocally, that I’d never have kids. But no one could or would tell me for sure. I went through untold grief, wondering if I was selfish to consider the op, should I just put up with the pain?But I was in so much agony all the time, and my period brought on actual labour pains. Eventually, I realised I needed my life back and went ahead with the operation.

It was full on. I had my cervix, womb and ovaries removed, as well as some ligaments supporting my hips and spine. I had these removed as my endometriosis had spread and was growing up them – like poison ivy – apparently this is quite common. After I’d made the decision, that’s when they told me the chances of a pregnancy were very low. I felt relieved when I came round from the op and they said the areas were diseased. Maybe that sounds strange, but I’d started to worry that I’d been going mad.

READ  The truth about testosterone for women

My conditions affected every area of my life. In my 20s when I had the coil in I could work normally and was pain free. But then I began to get chronically tired, a common symptom with endometriosis. I need a 2-3 hour nap just to get though the day. And I mean grindingly tired, aching, couldn’t get out of bed. I would take a temp job then have to quit. Eventually I started running a small business from home. I had a lot to offer, but physically I was struggling to cope.

When I was working I found I had to justify myself, to men and women. There was a lot of judgment from women who also said they had bad periods, and didn’t take me seriously. In my 20s, people assumed I was tired because I was drinking too much. I was depressed, in chronic pain and tired all the time. I felt disrespected, as though society didn’t take me seriously.

Now I’ve had the surgery, I feel the best I’ve felt in years physically. But mentally, my mood is very low. I’m on HRT and just figuring out the right dose of testosterone for me. I feel like there’s no ‘home’ for me – I didn’t go into early menopause naturally, I don’t have endometriosis any more. The support groups for these are fantastic, but I don’t belong there.

I’m so glad that menopause is being talked about more now. But I have been left to my own devices quite a lot. Often it’s months in between tests and check ups. I love the NHS, but I do feel very alone sometimes.

This really wasn’t a decision I took lightly. But I have no regrets.