Ah, Valentine’s Day. The most romantic day of the year! Pffft, not when you’ve been dumped on 14th February…more than once as well…aaaand by more than one person. 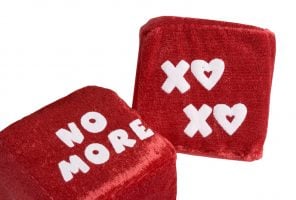 You want to know what the worst part is? I’ve actually lost count of the number of times it’s happened to me. To say I have been unlucky in love is somewhat stating the bleeding obvious.

It happened rather publicly at school when I was 13. We’d been a super ‘cute’ couple, mainly because we were (are?) both small for our age so the taller kids got to patronise us a lot. He got his best mate to ditch me, and I remember pretending to be rather upset by it and ripping up the card he’d got me. In truth, I was just embarrassed that everyone knew, and was worried they’d all laugh at me. A lot of them did. There was a necklace too. I think he nicked that from his big sister. I left it on the bus.

Was my first serious boyfriend, who ended up being a right horrible swearword anyway, so it was somehow boringly predictable he’d mess up that day as well. Experiencing domestic abuse at the age of 16 was quite possibly the steepest learning curve of all, and one that I don’t think has quite finished with me yet; this was nearly 15 years ago when there wasn’t the support for young people that you can find now, so boyfriends after this one were deemed as “not as bad as him”. What a thoroughly rewarding way to live life! Thankfully, in recent times, I have made a radical discovery that I am a person too, and thus probably deserve to be treated as an alright human being in a relationship.

READ  Domestic abuse: it was all my fault

Pretty much told me he didn’t think he was all that into me anymore, and perhaps we should break up; yes, let’s definitely break up. “WHAT? Do you realise what (insert many bleeps here) day it is?!” I yelled at him. “It’s (more bleeps) Valentine’s Day, you (even more bleeps; I am a potty mouth)!” His face fell and I watched the colour drain from his face. “Shit,” he said. “I forgot…”

Now, I think there’s another one. Is it utterly pathetic or brilliant that I don’t recall just how many gargantuan berks have ditched me on Valentine’s Day? It’s not like I’ve even had that many serious relationships, but there’s a nagging doubt that I’ve forgotten one.

It probably won’t surprise you that I’m not the biggest fan of 14th February. I genuinely do believe that it’s a load of corporately hijacked rubbish, and the idea of joining the rows of couples packed in at a restaurant, oddly resembling a prison visiting room and paying three times the usual cost of a meal makes me shudder; I think it really is my idea of hell.

I have been with a Welshman for over a while now, and Dydd Santes Dwynwen is far more appealing; on 25 January, it is customary to exchange love spoons with your loved ones. Like many Welsh tales, Dwynwen’s story is pretty harrowing, but it’s still a better love story than Twilight. This year I had flu and slept on boyfriend’s sofa while he worked in another room, and it was still better than Valentine’s Day.

That said, I have still caved in and bought him a card; it says ‘To my Wife’ on it, but it was the only one I could find that had owls on it. We like owls. I also bought him a rather adorable but utterly pointless cuddly lobster. The fact that no matter how cynical I am, I still secretly hope he’ll get me a card or some flowers makes me hate Valentine’s Day even more.

I should be more like my parents. They have been together for nearly 50 years, and married for 44. They don’t bother with Valentine’s Day; “You should let them know they matter and you love them every day, not just on a set date” my mum once told me. Logical and beautifully romantic all at once. I think they’ve got it sussed.

Helpful links: For advice on help with relationships contact Relate.