Home / Work and money / Financial / Retirement / Do women ever retire? A meditation on time

In the beginning, there was no retirement. There were no old people. In the Stone Age, everyone was fully employed until age 20, by which time nearly everyone was dead, usually of unnatural causes. Any early man who lived long enough to develop crow’s-feet was either worshiped or eaten as a sign of respect.

Mary-Lou Weisman, in an essay for The New York Times 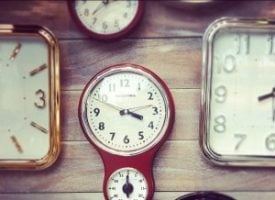 Time has taken on two meanings since I stopped working. There’s daily time that challenges me to manage the eight-hour daily stretch once consumed by work. This time seems abundant, but it is easily squandered, like a 20 dollar bill in your wallet that somehow disappears in a single afternoon. A cup of coffee, a newspaper, some this and some that. Bye-bye money, and good luck remembering where it went.

Then there’s ‘long time’, which includes deferred projects, from painting all the trim in my house, to finishing my second novel, to learning to make papier-maché masks of dog faces, to writing a memoir, to making a quilt for my granddaughter. The daily time tends to erode the long time, and leaves me pondering how to value each activity.

Defining yourself after retirement

If I am lucky enough to grow old, what will matter most? Any house painting I manage to do will need to be redone and then done again. There’s no guarantee that anyone will read my second novel, given that about 600 people worldwide read the first. The baby quilt will fade and shred from many washes. I might be stooped over with arthritis, missing the days when I could fold warm laundry fresh from the dryer. Truth is, I cannot know, and asking these questions undermines my resolve to get started on one of these projects. I’m perfecting procrastination, but feeling guilty about it.

READ  Do women ever retire? Good commands for dogs and people

When I meet new people, the first question, after ‘where do you live?’, is ‘what do you do?’

“Well, I’m retired,” I say. The new friend looks envious (rightly so) but the question nags at me. What should I do all day, all year, for the rest of my life? After a little research, I learned that retirement is a relatively new social invention, enacted in the USA in 1935 during the Depression to encourage older workers (age 65 and not expected to live much longer) to leave and make their jobs available to unemployed younger people.

It turned out that workers were not eager to do this unless they were paid, hence America’s Social Security Act. Even with Social Security, people were adrift until Charles Webb started developing retirement communities, replete with golf courses, pools, bike trails and clubhouses, at which point play became the work of retirees.

That much play makes me nervous. There’s not much to show for it at the end of each sun-filled day.

The quest of retirement

Retirement is presented as an end, but I’m thinking of it more as a quest. Quests can be frightening; the hero usually faces monsters (self-doubt). A friend of mine is afraid to take a painting class, because she might not be any good. I tremble when approaching the novel. Another friend is painting her study again, while she waits for poetic inspiration.

In quests there are obstacles, such as failing health or insufficient resources, or in my case the lack of a perfect room by the sea that would facilitate a long writing project.

A seeker encounters charlatans (people selling quick answers), and wise teachers (they are everywhere in unexpected places). I took my first yoga class at the age of 66 and found inspiration from a soft-spoken man who asks his students to listen to their own bodies and not to him.

Quests take time; they can be filled with surprises, and hopefully the hero emerges triumphant. Right now I’d settle for a small victory over time management, and just a little more courage – but it is early in the process, and the journey is just beginning.