September. The first signs of Autumn in the air, the nights starting to draw in, schools and colleges starting back. But something else September brings is an unexplained spike in the number of divorces being filed. 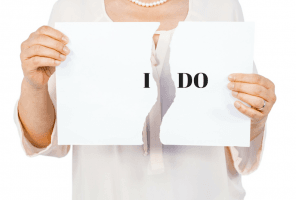 The first working Monday of the New Year is often called ‘Divorce Day‘ as there are so many post-Christmas enquiries. But this phenomenon isn’t confined to January, and the ‘September spike’ can also see a high number of people looking to officially end their marriages.

The interesting thing is that nobody quite knows why this happens but there’s plenty of speculation and possibilities.

As grown-up children fly the nest to start new lives at college or university, some couples may simply decide there isn’t anything holding them together any more. Or that they’ve done their ‘duty’ by sticking together while the kids were at home, but now is the time for the independence of single life. The stress of family summer holidays and extended periods of time spent together – just like at Christmas – can also possibly make couples realise they don’t see a future together.

Regardless of the reasons, it’s important to understand the facts about divorce, rather than relying on myths and hearsay. If you are thinking about filing for a divorce, here are some common misconceptions:

1. I am a ‘common law spouse’ and have the same rights to my partner’s assets and income as I would if we had been married.

There is no such thing as a ‘common law husband/wife‘ and should a relationship break down there is no automatic entitlement to a share of your ex-partner’s assets.

See also  Dealing with the devastation of abuse

2. If your husband/wife committed adultery you will be entitled to a greater share of the assets.

A party’s adultery, whether admitted or otherwise, will not be taken into account when distributing finances on divorce. Adultery is one way of establishing that the marriage has irretrievably broken down and once this has been established there will be no need to reference it again.

3. The Court takes into account who is to blame for the breakdown of the marriage.

The Court is not concerned with apportioning blame to one party. The Court’s aim is to assist in finalising matters and moving the process forward. Similarly, the Court will not consider the conduct of either party during the proceedings unless it is of a severe nature.

4. There is such a thing as a ‘quickie divorce’.

Despite all the features in glossy magazines about celebrity ‘quickie divorces’, there is no such thing. The legal process of divorce has to follow a set structure which is the same for everybody.

The only way of speeding up a divorce is if both parties comply and promptly sign and return all necessary paperwork. It is also important to remember that the speed a divorce progresses depends on how busy the Court is, which varies from time to time.

Although this is the starting point, the Court will consider other factors such as the age of the parties, the length of the marriage and the needs of each of the parties amongst other things. Not all cases warrant an equal division of the assets and a lot depends on the individual circumstances of the case.

For example, if one party has primary care of young children and is unable to work full time or at all then the Court may consider it fair to award that party a greater share of the matrimonial assets to reflect this. There may be inherited wealth to be treated differently or pre-marital assets to distribute separately.

See also  Single and satisfied... in sickness and in health

The legal system does not favour one gender over the other. The Court considers various factors such as the contribution of each party, their income needs, their earning capacity etc. before distributing the assets. There are many cases where a husband has given up work to look after children resulting in the wife having a successful career and being the higher earner.

8. Hiding money with a third party will mean your husband/wife won’t get it.

This is a very risky game to play. The Court has various powers to protect a party who believes that their spouse will try to hide assets. Assets can potentially be frozen or a transaction can be reversed. The Court takes a very dim view of any party who attempts to hide assets.

9. You should not disclose anything which you are not prepared to share.

There is a strict duty of full, frank and clear disclosure in all family matters. Failure to adhere to the Court’s requirements in relation to disclosure can have severe consequences, including financial penalties.

See also  The joy of singing