Women never cease to amaze me, especially since entering the world of business. 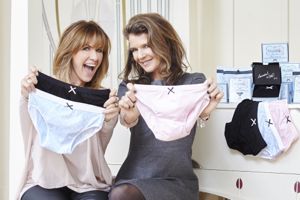 Perhaps it’s because our business is exclusively and unashamedly female, we don’t even have to try to appeal to men, and they will never be our customers.

From the first Tweet I sent to Jacqueline Gold, CEO of Ann Summers, asking ‘how do you turn a taboo subject into a High Street phenomenon?’ and then finding ourselves in the reception of their head office with the welcoming sign ‘It’s a business doing pleasure with you’ I knew we were in for one hell of a ride… (ooh err Mrs!).

What was the taboo subject? The three Ps. Periods, pelvic floor and post-maternity problems. All times when women can be taken by surprise with sudden leaking, and times when regular pants just aren’t good enough, even with sanitary protection.

How it all began

To this day, we still pinch ourselves at the speed of this journey from the beach to the boardroom, when the first conversation took place on a beach on holiday in Portugal…

‘We’ being my friend and now business partner Annabel Croft. It was summer 2011, and we were having a girly chat about life in general, bringing up our four teenage daughters, and how we spent so much time stripping beds and washing sheets when their monthly cycle arrived unannounced.

Annabel went on to relay tales of her early days as a 15 year old rising tennis star, touring the world, and staying with host families, mortified at having to admit she’d marked the sheets in the night.

Her mum gave her what she described as ‘a shower cap with legs’ – plastic, scratchy sweaty pants to avoid those awkward moments, and to be fair, they did the job, but who wants to wear plastic pants? 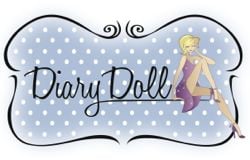 Add to that the nightmare of playing tennis in a short white skirt all day, and I looked at her with a renewed sense of admiration.

That’s when the idea of DiaryDoll pants was born.

The world may have moved on in many ways, but women’s cycles, it seems, are still firmly behind closed doors.

How can it be that we spend fortunes on pants to make us thin for a night, or gel-filled bras to give us those longed-for curves, yet the one thing we all have to deal with, every month of our adult lives, has never been properly addressed?

Our first port of call, was obviously our own daughters, but let’s face it, most teenage girls are prone to a little exaggeration or are just outright fantasists at the best of times, so we decided to survey 100 teenage girls across three schools, to get some honest feedback.

The results were startling:

Women have busy lives, working, raising a family, but for most of us, there comes a time when we take control of our own health, fitness and wellbeing.

READ  How to survive holidays in the heat

We join a gym, take up running/zumba/golf, and that’s when we realise, ahem, things aren’t quite as they used to be…

Ask any woman on the planet, once she’s had kids, has she ever ventured onto a trampoline? If so, she only ever did it once.

If you thought periods were taboo, pelvic floor weakness is in another league.

Nobody likes to think they’ve reached that stage. It conjures up images of living alone, with lots of cats and smelling faintly of wee…

But the truth is very different. Light stress incontinence is very common. It may only happen on the third sneeze, blowing your nose too hard and too often, or running for a bus, and although we may laugh, it’s a massive confidence knocker.

Another time when you need a little extra from your pants is when you’ve just had a baby. It isn’t all sweetness and light, and the practicalities can bring you back down to earth with a bump.

Every woman wants to feel pretty and cared for, especially at a time like that, yet incredibly most are still going home from hospital in paper pants or cheap throwaways! Have we learned nothing over the generations? 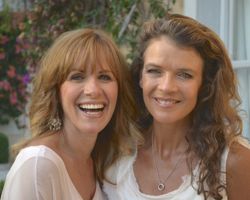 Three years later, we are now in over 500 stores and are still thrilled to receive letters, almost daily, from customers who tell us DiaryDolls are ‘life changing’, whose daughters ‘skip to school now’ or who just say a heartfelt ‘thank you’.

We have always believed that women are amazing. We help one another in times of crisis, and share information in a way that men cannot seem to do.

READ  Seven tips to help you ride the menopause rollercoaster...

We don’t see it as a weakness to say ‘help, I don’t know what to do!’ because we are all part of a team, and team spirit is what makes us strong.