If you’re over 35, then you’ll remember British Telecom’s ‘It’s good to talk’ campaign.  It was very clever, because it’s absolutely true.  And especially so when you have mental health problems. 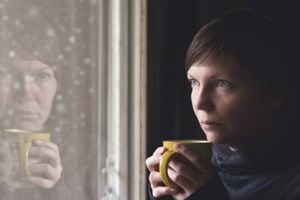 I’ve taken medication for anxiety for a number of years, mostly because it manifested itself in physical symptoms, as anyone with IBS will understand!

But recently I’ve been struggling with a whole new bunch of issues.  Or rather, a whole bunch of issues I’ve had for many, many years that have decided to reach out and beat me around the head on a far-too-regular basis in the past few months.

Despite appearances to the contrary – I’m a loud, at times even brash, 52 year old that appears to ooze confidence – I have always suffered from low self-esteem.

My confident exterior is the mask that I hide my issues behind; not unlike the way many comedians use humour as a form of defence.

I am constantly surprised if people like me; thrilled – and equally surprised – if someone praises me, even if I actively seek it out.

I’m convinced I don’t deserve to be loved and so anyone who says they love me will learn not to and leave me. And terrified that everyone will find out that I am total fraud.

Recently, for reasons I’m not yet sure I fully understand, these voices have become louder and more insistent.

I came fully to this realisation this at work.  I work in a team of around 10 people.  Alphabetically, my name is last, and our proprietary email management system arranges names in alphabetical order.  But when I saw my name at the end of this list, as emails arrived from various members of the team, I convinced myself that this was because I was the afterthought. The least important or, worse, the least useful.

Rationally – and 30 seconds after the first negative thought – I knew this to be ridiculous.  But it happened every time I opened a team email.

Paranoia was beginning to be my default position and that was the point where I realised that I probably – let’s make that definitely – needed help.

I have been through this before but it’s easy to forget how it feels to live in a world where rational thoughts barely exist, and the irrational emotions that obliterate self worth and emphasise every negative thought you’ve ever had take over.

Where you can make the simplest conversation unbelievably complicated, because of your inability to separate discussion and debate from blame and incrimination.

And where every ounce of your being tells you that it is your fault, that you are worthless, that you deserve bad things and that you are particularly useless at anything and everything of worth.

I’ve not been sleeping properly and have lost my sense of purpose and motivation.  Every day has been a struggle to get up and get on.

Oh, and I’m comfort eating, so I’ve put on weight… I don’t need to continue this sentence do I?

Being stoic and female (and perhaps, more than a little proud and scared) I’ve been hiding all of this from everyone.  Except not sleeping – that’s been written on my tired face for anyone who wanted to see!  Though I’ve found that make-up can hide a lot of blemishes, including those that live inside us.

So earlier this week I went back to my doctor and was more honest about how I feel than I have ever been before. 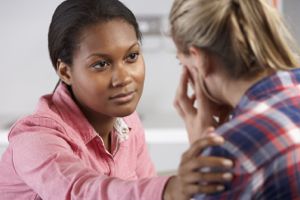 I am, it turns out, depressed.  My medication has been increased and I’ve been referred for counselling. Fortunately, my employer offers counselling on a no-questions-asked no-charge basis, so I’ve already been able to have my first session.

See also  Getting older: how to be the best version of you

Of course, the counselling is telling me what I already know. I am actually an intelligent, articulate, lively 52 year old who looks pretty damn good for her age!

I have a wonderful partner and two fabulous sons who are making lives for themselves with two equally fabulous young ladies.  And I have a good life.  A house that is a home.  Holidays.  An extended family that care for me, and that I care for. It’s those voices inside me that get in the way.

Give it a name

But now those voices have a name. I had a light-bulb moment in my very first session.  My counsellor described my voices as ‘bullies’ and, he said, if you don’t give bullies the courtesy of a response they eventually shut up and go away.

This reminded me of Gollum and Smeagol arguing in the Lord of the Rings film.  I could picture the scene when Smeagol tells Gollum to “Go away and never come back”, and he does.

And I thought, I can do that. So now my voices are called Gollum and when they start to talk to me I will say to them “Go away and never come back!”

I shall encourage my friends and family to tell me when they can hear Gollum, not me, when I am with them.  I’ll continue with the counselling so that I can understand why I feel like this and so I can avoid Gollum coming back in the future (as, of course, he does in the film).

So, it really is good to talk.  You never know where the conversation will take you.  I’m convinced that talking to my friends, family and my counsellor I can kick Gollum out for good.

And by talking to all of you too, hopefully a few more people will find our how to kick their own personal Gollums out, too.