It’s almost the third anniversary of my father’s death, which made me think about his last few years. Having to say goodbye to a parent once is hard enough, but twice is even harder. 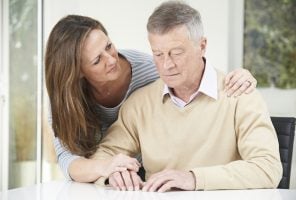 This is the case for many people, like myself, who have seen a parent, or loved one, struggle with Alzheimer’s disease or vascular dementia – my dad had both. He had been having memory lapses for a lot longer than I knew, as my mother, his partner for over 50 years, had covered up for him for quite a while; scaffolding his day, his clothes, his meals, his appointments.

The time it became clearer was when my mum had to go into hospital and she asked me if I would stay with my dad. She said he was useless in the house and made a joke of it. However, it soon became clear that there was no joke; just a man whose routine had been shaken and who found it hard to rationalise what was happening.

This sequence was cyclical and repeated very, very often. It went on for the three and a half weeks she was in hospital. We tried writing it down for him; he crumpled the paper and put it in the bin. He would visit her in hospital, then immediately forget.

It became so evident how much my mum was supporting his whole life. Other issues were him wanting pies for lunch every day and being immovable on this. Showering or bathing was a no go, as was changing his clothes. I had to get quite sneaky and exchange his clothes at night so that new ones were on the chair when he woke. Even in the middle of the night, he would knock on the bedroom door and ask where my mum was and the whole cyclical conversation would begin again. It was wearing and upsetting, although he couldn’t help it.

There was a sad, but gradual, realisation that my dad, the one whose wise countenance I would seek in difficult moments, had gone for good. Like it or not, there was now a new version of my dad, whom I had to get to know and make friends with. Once I came to terms with this, there was still fun to be had. He was quite naughty, impish even, with a childish sense of humour.

When my mum got out of hospital, if she rationed his biscuits, he would stick his tongue out and sneak one when she wasn’t looking. There was also the frightened child side of him when he was faced with a new place, or new people. He needed the reassurance he had always given me. The dad who had walked me round the garden balanced on his feet now needed me to carry him.

There were times I cried – never in front of him or my mum, but at home, or actually mostly in the car, travelling to work or back. I saved my cheerful face for him. The rest of the family rallied round and he was never without company. Even when he could no longer work out family relationships, he would tell us all that we were welcome visitors and if we told him we loved him, he would say “I love you more”.

There were tricky times when I was out with my mum and dad. By now, my mum’s mobility had decreased and my dad was becoming more awkward. He would refuse to do things, but couldn’t be left. So there were occasions when all three of us had to venture out into town.

See also  How a family lawyer can help if you are cohabiting...

On one memorable occasion, we were standing outside M&S and my dad refused to go in as he wanted to smoke a cigarette. My mum was getting really flustered and I knew she couldn’t manage the trolley or bags, yet there was no moving my dad. In desperation I looked round and saw a Big Issue seller. In a moment of what could have been madness – but luckily wasn’t – I approached the seller, bought a copy and asked him if he could please keep an eye on my dad until we came out of the shop. And he did! I do not recommend this, but I offer it as an example of how carers can be stretched and look for desperate solutions.

I was very lucky that my manager was so understanding and allowed me to work around my dad. Many people are not so lucky and have to give up their jobs. I did ask my mum if she wanted us to get help in, but she said “I’ve had him for 55 years, I’m not letting anyone else touch him now!”

For three years there was a kind of plateau, then suddenly, he started to fall. He told us that his legs had forgotten how to walk. He was not troubled by this, but we were. The most poignant thing he said to me in a period of profound lucidity was, “Life is leaving me behind,” which made me immensely sad and made me think of life as people marching in a long line, with the older members gradually getting separated from the others, falling off the back, as they got slower, while life marched ever onwards.

See also  What every woman needs to write: a love letter to yourself

After a series of falls he ended up in hospital, where he then suffered an internal bleed and died with us all around his bed. In some ways, this was a blessing, as he didn’t have the long descent into not knowing who any of us were.

I know many of us will have this situation to face – there is a joy and sadness in having elderly parents. The hardest part, I think, is learning to let go of the person you knew, and making this new relationship with the changed version. We were lucky that my dad kept most of his personality and did not have mood changes or become violent – and I value my early memories with him much more now.

I still prefer to think of him like this, rather than in his latter days. But young and capable, or old and awkward, he was still my dad and I loved him.