Home / Happiness / Wellbeing / Bereavement / Dealing with… decluttering after a death

A close friend’s father died a couple of weeks ago, and now she has the unenviable task of picking through his things: drawers, books, pockets, personal effects – the usual no-go, private areas which you would never imagine being peered into by others. 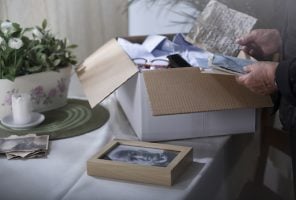 It’s doubly sad because her mother died only a year ago, so she is not only clearing out her father’s things but some of her mother’s, too. And soon, although she may not have realised it yet, she will be joining the Dead Rellies Repository Society.

I sympathise, as I joined it when I was only 37. My mother died, closely followed by my step-father a few months later. Emotional doesn’t really do it justice. I was in floods when I found a newspaper cutting or a handwritten recipe tucked away in a book, or a little love note in a dressing table drawer.

I didn’t love most of my mother’s possessions, such as the round mahogany dining table or the faux Louis XVI chairs and the 60s teak spinet. But I couldn’t chuck out the mountains of photos, cuttings albums – she was an actress – and telegrams. Then there was all the granny stuff which Mum had been a repository for when my grandmother died, and their rellies, and so it goes on…

The saddest item I found was her make-up box, with half-used lipsticks, creams and pencils, still smelling of her, an ancient 4711 bottle, an overused powder puff.  I still have most of the contents, as well as the box, to this day.

So not only do people die on you, they leave their possessions behind for you to have to deal with. There are no pockets in shrouds, as one of my friends says!  You have to sift through all their belongings, decide what to sell and where – upmarket auction house or regional version as seen on Flog It?

See also  Notes from the Auvergne: Christmas in France

Then there are the charity shops, and finally the house clearance company – think Lovejoy only without the joy.

I’m lucky. I’ve got a loft, which is where most of my dead rellies’ things have been put, or rather, I’m ashamed to say, dumped. I can’t bear to go through them and declutter. I’ve already done that a few times, what with moving house twice and redecorating the loft, and trying to find things under things, and… well you get the picture.

Making it easier on your relatives…

So this is a jolly little piece, you’re probably thinking – why am I reading it?  Because you know it’s true, and it can and probably will happen to you, to paraphrase Ol’ Blue Eyes.  And it’s something that you are more than likely to experience from your 40s and beyond.

Is there anything you can do to minimise the pain?

Well, to be honest, not really. Unless your parents are good at decluttering, and I’m not sure many of that generation are, then you are going to have to deal with it – the pain, the sadness and the hassle.

If I was an old rellie – and I am fast becoming one – I don’t think I’d appreciate my kids asking me when I was going to have a good clear out and by the way could I make sure I keep the little picture in the downstairs loo because they’ve always loved it and would like to have it when I’m gone.

But what you could do is to make sure you don’t leave mounds of stuff for your family to deal with when you’re gone. That way they don’t have to join the Repository – at least not fully. You could ask them whether they want you to keep the full, dog-eared set of Dickens which belonged to your great-grandfather, or the signed photo of Noel Coward, or the ballet programme in which you appeared as Third Fairy. It might help to minimise their pain and make their experience of your leaving just a tiny bit easier.

See also  Where do you put your parents?

There are no two ways about it. Death is hard, and what’s left in its wake (pun intended) can be harder, so if there’s anything we can do to lessen the sorrow, we should consider it. That way, the Dead Rellies’ Repository Society may see its membership decrease just a little.