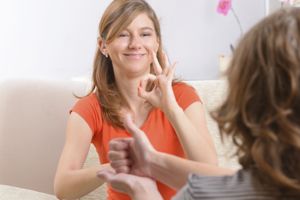 It is 1953. My mother’s friend, Mrs T, admonishes a passer-by at Victoria Station for staring at her daughter in a noisy group of deaf children on the platform.

My mother never challenges gawkers but I am told to stare back. At eight years old I relish breaking rules that, somehow, don’t apply where my sister is concerned.

Before television was widely available, few people understood deafness, often referring to deaf people as ‘deaf and dumb’ regardless of whether they used their voices.

The noisy rabble on the platform should have put paid to that misconception. Hearing and deaf siblings caused an equal measure of commotion; their joy apparent as they faced each other, touched arms for attention, waved hands at their mothers.

Of course, their speech was different. Yours would be if you’d never heard the words you use every day. Some shouted. Others were quieter. But they were never dumb.

Ignorance abounds. Few understand the difference between genetics and those deafened from illness such as meningitis, the cause of deafness in 25% of hearing impaired children.

My sister was in the latter group but many questioned whether I should have babies! Another myth is that all deaf children can be helped with hearing aids, but for the profoundly deaf like my sister there is nothing.

Also, until a few years ago no one could foresee something called a cochlear implant (a surgically implanted electronic device which can provide a sense of sound to deaf people). 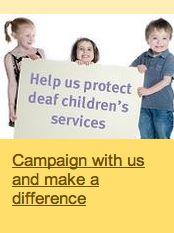 It was three years before my sister’s diagnosis in 1943, with my mother’s concerns repeatedly dismissed as neurotic. Even today some deaf children are misdiagnosed with deceptive behaviour giving the impression they can hear.

In wartime, the tentacles of conscription extended into the heart of schools for the deaf, with young men and women snatched from their vocation. A teacher of the deaf was not a reserved occupation.

Even today, charities must campaign to retain funding – such is the invisibility of deafness.

The NDCS (National Deaf Children’s Society) receives 95% of its funding from the general public. This is the organisation which arranges visits to families coping with a newly diagnosed deaf child. They offer support, advice, links to other families and teach early signs to mothers who then teach their babies.

Five per cent from the Government? Can you believe that?

As we approach the 2015 General Election, I shared a Facebook post from NDCS and activated a link to ask all my candidates here in Dorset if they would support deaf children. Four days before The Big Vote and no answer from any of them. Sadly, I have to say I am not surprised. It is the Cinderella of disabilities.

Our local authority, Hertfordshire, refused to fund my sister’s schooling until she was seven, despite professional advice that language and learning opportunities were being irretrievably missed.

Specialist teaching from three years old was available privately with Mary Corbishley at Mill Hall Oral School for the Deaf, where the children were taught to speak and lipread. Family members emptied their coffers for this essential start in her life.

At 13, my sister gained a place at Mary Hare Grammar School for the Deaf, again an oral environment. She was a Queen’s Guide and camped each year with hearing Guides from Harpenden.

Excelling at sport, she later played weekly fixtures in the Harpenden Ladies Hockey team. A brilliant tennis player, she always made the semi-final or final in the local tennis club championships every year.

On leaving school, she trained on the comptometer (a key-driven, mechanical calculator). Despite her high intelligence, she could only do repetitive boring jobs with no use of the phone or face-to-face contact.

Isolated and frustrated she battled depression, a common problem for deaf youngsters.

Fiercely independent, she bought a scooter, passed her driving test and then the advanced driving diploma. Her success featured in the local paper, the banner headline, ‘Young person overcomes disability’. Later she learnt to drive.

People asked me, should she drive?  Wasn’t it dangerous?  ‘Well,’ I said, ‘hearing drivers with music blaring out of their in-car entertainment can’t hear an ambulance or car horn either.’  I still have to repeat this analogy.

Eventually my sister met her husband-to-be, who is ‘deaf without speech’ and uses finger spelling with a smattering of Australian sign language.

Far from being a language barrier, they communicated well from their first meeting and lead a full life travelling the country to deaf events and abroad on holiday. 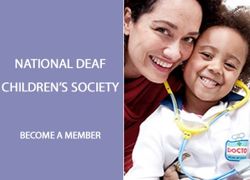 For important meetings and medical appointments they have a qualified interpreter but clearly they are unusual or lucky, as the charity Action on Hearing Loss is campaigning via Facebook and Twitter for every deaf person to have an interpreter at GP appointments.

My mother, a founder member of the National Deaf Children’s Society, would be appalled at such lack of progress over 70 years.

When, in 2005, at the time of my sister’s hip replacement, a nurse brought her a satellite phone, the interpreter showed little surprise. Having watched them shout and speak to her as if she was an imbecile, I returned to the hospital armed with my own guide sheet on how to speak to deaf people.

Unbelievable that nursing training apparently missed out this element of communication.

Attitudes have improved, although only five years ago, visiting Harpenden, our childhood home, for research, someone had a Eureka moment and referred to remembering my ‘deaf and dumb sister’.