Home / Health / Dying, death and bereavement / Good from bad: Julie Bailey and her quest for the truth

Julie Bailey was catapulted into campaigning after the death of her mother in Stafford Hospital. 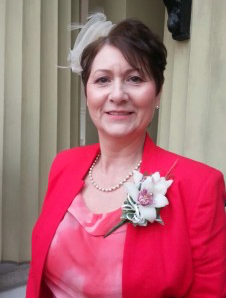 After her mother’s traumatic death in an NHS ward in Stafford Hospital in November 2007, Julie Bailey made a complaint to the Health Authority. She was not satisfied with the response. She was told it was “an isolated case”, that “lessons had been learnt,” and an “action plan” was in place to prevent any recurrence.

Unfortunately for the authorities, Julie ran a café in the centre of Stafford and had come into contact with others who were telling similar stories of appalling care in the local hospital. Eventually she put an advert in the local paper encouraging anyone with concerns about patient safety to make contact with her. She was inundated with replies from people desperate to share their stories.

Many of us would have wept at this point and walked away, defeated. But Julie felt then and still feels today a huge moral duty to make sure no other patients go through what her mother did.

So, on Feb 16th 2008, her mother’s birthday, Julie submitted a huge report to the Healthcare Commission, who were the regulators of NHS care until 2009, when the Care Quality Commission took on the role. The report Julie sent detailed the cases of 45 patients and 52 failings in basic care from 2004 onwards and asked for a full investigation into patient care at the hospital.

Julie also wrote to the Parliamentary Health Service Ombudsman but her  was turned down on the grounds that lessons had been learnt at the hospital.

On the day she received this decision from the Ombudsman, she was contacted by the relatives of a man, who had died shortly after receiving a blood transfusion, in circumstances very similar to her own mother’s death.

The fact that Julie was making waves at this time may have influenced the Healthcare Commission to finally investigate unusually high death rates at the hospital (death rates had been high for some years). In March 2009 their report was finally published. It was utterly damning of the hospital’s standards of care.

The role of the regulators 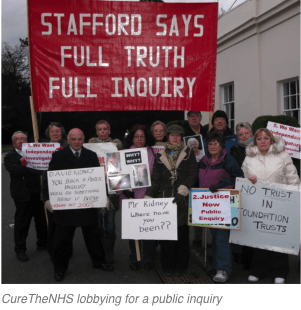 After the report was published, Julie pressed for a public inquiry into the regulatory authorities’ role in what was now openly recognised as a scandal. She and a small group of key supporters regularly camped outside MPs offices to quietly make their point. To Julie, a public inquiry seemed like the logical next step. Not a witchhunt but a necessary investigation into what had gone wrong with the regulatory system. A necessary next step to ensure the tragedy could never happen again.

But that was not how the authorities viewed it. Investigations are expensive, often embarrassing and turn up unwelcome truths, identifying individuals and systems which have failed. Labour politician after Labour politician refused the public inquiry.

Then came David Cameron’s visit to Julie’s café in April 2009. Julie explains to me that Cannock and Stafford were key seats for the Conservatives to win in the coming General Election and Cannock’s constituents are served by Stafford Hospital. Julie tells me that when Mr Cameron made a verbal promise that if elected he would grant a public inquiry, she grabbed a piece of paper and pen and made him write down his promise.

The public inquiry is granted

Shortly after the Conservatives won the election in May 2010, Mr Cameron announced a public inquiry. Robert Francis QC finally published his report in Feb 2013. It made 290 recommendations.

The report acknowledged the appalling suffering of many patients.

and suggested that the Hospital Trust Board did not listen sufficiently to its patients and staff or ensure the correction of deficiencies brought to the Trust’s attention. Above all, it failed to tackle an insidious negative culture involving a tolerance of poor standards and a disengagement from managerial and leadership responsibilities.

The price of pursuing the truth

To my mind, there is no question that Julie was right to persist and that hospitals are safer places to be as a result of the Francis inquiry. And it is clear to me that Julie has paid an enormously high price for pursuing the truth.

She feels she has been vilified in Stafford by a small group of locals, who mistakenly believe that she wanted to shut Stafford hospital. She tells me she has been shouted at, spat at, her tyres have been slashed, human faeces has been put through her letter box, she is abused regularly on the internet and her mother’s grave was even desecrated. She now lives out of the county, effectively in hiding. She had to sell her café and dog grooming business and now lives on a shoestring, devoting her time to the campaign work and to supporting the hundreds of individuals from around the country who still contact her with concerns about patient safety.

Despite all this her fire is undiminished and she does not yet feel her work is done.