When we talk about civil partnerships, many people assume this applies to a same-sex couple. But this could soon change. 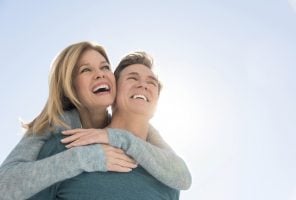 After being denied their right to enter into a civil partnership instead of a marriage, a heterosexual couple have won their appeal to the Supreme Court who unanimously ruled in their favour.

Rebecca Steinfeld and Charles Keidan launched their legal claim around four years ago, during which time they have had two children.

“We are feeling elated,” Rebecca told the BBC. “But at the same time we are feeling frustrated the government has wasted taxpayers’ money in fighting what the judges’ have called a blatant inequality.”

The couple do not believe in the institution of marriage – they consider it to be patriarchal and sexist. They have fought a lengthy legal campaign to open up civil partnerships to heterosexual couples.

The highest court in England, the Supreme Court, declared that the ban preventing heterosexual couples from civil partnerships was incompatible with their human rights. In particular, this applied to the right to a private and family life, and amounted to discrimination. This ruling overturns a previous judgment of the Court of Appeal, which rejected the couple’s claim.

This ruling means it is now far more likely that the government will act to change the law.

What is the current law?

Since 2014, the law has provided that heterosexual couples may only marry. Same-sex couples can choose to either marry or enter into a civil partnership. A civil partnership offers legal and financial protection for both parties in the event of relationship breakdown. It is similar to marriage, but free of its religious connotations.

There are already around 63,000 couples in civil partnerships in the UK. There are also 3.3 million unmarried cohabiting couples. Many of these want legal recognition and financial protection. But they cannot get this without entering into marriage.

Other countries already allow couples to choose either a civil partnership or marriage. This would suggest there is a demand for both arrangements. So why isn’t this an option in the UK?

What is the future for civil partnerships?

While the government has acknowledged the inequality between same-sex and heterosexual couples, it is likely that a decision about the future of civil partnerships will take some time to work its way through the legal system.

This would still leave behind the rights of those couples with no formal legal arrangement to recognise their union and who as a result leave their relationships with nothing after many years and who in some instances have had children.

Ultimately, the law needs to catch up with the reality of family life in Britain in 2018.