A new look at the Cinderella story.

Once upon a time there was a very beautiful girl who lived in a big old house with her father, ageing stepmother and two older, overdressed and very badly made up stepsisters. 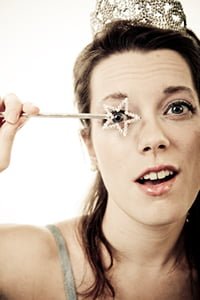 Her name was Cynthia, and her job was to keep the big old house clean and tidy. This was before the days of Hoovers, Flash and even electricity; what she had to do the work with was a wooden bucket, ice cold water that she had to fetch from the well and a set of brushes that she’d inherited from her grandmother.

Suffice to say, the work was never finished. Her clothes were filthy and her personal hygiene was none too good either.

Her stepsisters didn’t call her Cynthia, they called her Cinderella because she slept by the fireplace to keep warm and often got covered in cinders.

She hardly ever saw her dad –  because to be honest he was a bit afraid of his second wife who’d made it quite clear that he wasn’t to be seen socialising with his daughter. Cynthia only had one real friend, Buttons, the lad who looked after the horses, the coach, the kitchen garden and all the outdoor maintenance.

The prince was one of those 32-year-old commitment phobics who was waiting for “the one”. One day, the king and queen sent out party invitations to every unmarried woman in the land. They wanted to give their son a chance of finding a decent wife; he was dragging his heels a bit when it came to getting married and settling down. He was familiar with most of the single women in the countryside anyway, and he wasn’t looking forward to the ball.

See also  Look at me while we're talking

The two stepsisters were out of their minds with excitement at the thought of going to the ball and possibly snagging the country’s most eligible bachelor.  Cynthia wasn’t all that bothered. Besides, she didn’t even have a dress and it would take months to scrub all that muck off.

The sisters and the stepmother set off for the ball early, taking the carriage and forgetting about the dad. He arrived down at the kitchen, where Cynthia and Buttons were sitting in front of the fire, which was glowing red orange and yellow and crackling as the wood heated up. Just as he came through the door, the windows flew open and in floated a rather elegant, grey-haired fairy of a certain age. She asked Cynthia if she wanted to go to the ball.

“Cinders,” she said gently, “would you like to go to the ball?” “No,” Cynthia replied, “I’m fine here with Buttons and my dad.”

“Think about it for a moment,” said the fairy, “You could have a beautiful new frock, shoes made of crystal, a golden coach, a whole team of servants and we would do your hair and makeup. The Prince is certain to fall in love with you, you’d get married and live happily ever after.”

“Honestly,” said  Cynthia, “I’ve met the Prince and he’s not all that, although he certainly thinks he is. It wouldn’t be long before he decided to look elsewhere and I’d be stuck there pretending to be happy. It would never work out.”

The fairy had to think again. This wasn’t what was supposed to happen.

See also  Learning to say NO!

But as the fairy watched the three of them having a glass of mulled wine and chatting, she thought of a new plan.

She quickly flew down to the Palace, stripped off one of the sisters’ terrible makeup and gave her a natural look, put her in a beautiful, simple dress and a pair of killer heels and planted her on the dance floor right in front of the Prince. Ace. Love at first sight.

She also fixed up the second sister who was more than content with the Prince’s footman. With her daughters set up at the palace there was no way that their mother was ever going back to the big old house.

Without the ridiculous expense of the stepmother’s clothing, hair and personal maintenance budget,  Cynthia’s dad found out that he had plenty of money to employ a few more helpers around the place and do up the decorating a bit.

Buttons got the estate management job and eventually plucked up the courage to ask Cynthia to marry him. Naturally, she accepted.

Even though they had the choice of some lovely big rooms in the newly restored old house, their favourite place was always sitting by the kitchen fire, drinking mulled wine, watching the flames and listening to the crackling cinders.

Cinderella for the 21st Century – a Henpicked Christmas tale.