Going to see Father Christmas in Lapland at Christmas. That is what dreams are made of, surely?

But when I took my family, I must admit that although it was an amazing experience, it really left me with mixed feelings. 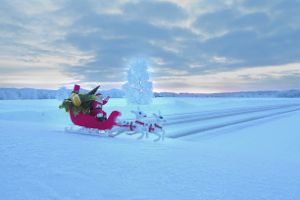 It was the first time in my whole life that I had booked a holiday 10 months ahead, but I knew to get the exact flights, resort and accommodation we wanted then we would have to book early and so for nine months, three weeks, one day and 12 hours my husband and I kept it a secret from our children Rick, 10, and Olivia, five.

We’d planned it with exact precision. We, well to be honest I, took them to weekly skiing lessons under the pretext that they may get the chance to go on skiing holidays with school, and I started buying loads of mega warm clothes and planning the presents we could slide into our cases unnoticed.

On the morning we were going to tell the children about the holiday of a lifetime, I was a nervous wreck, shaking with anticipation. So much so, I actually dropped a bottle of milk all over the kitchen floor.

We took a video of the moment to capture their excitement as we told them about actually going to see Santa on Christmas Day. I could only imagine how exciting that would be for a 10 and 5 year old, more for my daughter as she knew he was the ‘real deal’, if you know what I mean.

We had wrapped up salopettes to see if they could guess why they would need them. Snowdome at Tamworth was their closest guess so when we actually told them they literally leapt off the sofa and went crazy with excitement.

READ  The things we do for love!

So on 23 December we set off. The plane ride was something else, nothing like I was likely to experience again. Children looking pale and ill with overflowing anticipation to actually see the ‘real’ Santa. There were Christmas carols, games, sweets and happy cabin staff (not something you see every day). 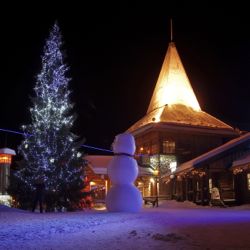 Nothing could have prepared us for what was to come. I am not geographic genius but I knew it would be cold, it’s near the Artic Circle for goodness sake. But stepping off the plane in -30ºC of cold was something else.

I think the adrenaline saved us from the initial severity of the weather and actually it wasn’t like the ‘wet’ cold we get here when it’s snowing.

Everything about Lapland was magical. There were sleigh rides, visit to Santa’s Post Office, a snow safari to an igloo and the Northern lights. The pinnacle on Christmas Eve was seeing Santa ‘fly’ in the sky (the reality is you can hardly tell the difference between the land and the sky hence the illusion)… what’s not to love?

Even being dark for 21 hours a day and icicles forming on your eyelashes didn’t dampen our enthusiasm – it was amazing.

So we woke up on Christmas morning full of even more excitement and anticipation for ‘The Day’. We exchanged lots of presents and did all the usual Christmas morning traditions, the only thing being we weren’t at home.

What I couldn’t understand is why I felt so odd. After all I was in the world’s number one Christmassy place. We spoke with our family at home – who were so jealous of our dream holiday – but I still felt weird.

As the day wore on even after Christmas lunch, again with Santa, my feelings didn’t change and then it hit me. You associate Christmas with all the traditions that you do year in year out with out even realising the significance.

Last-minute wrapping on Christmas Eve, drinks with the family in the same pub every year, preparing the endless veg and waking up to the smell of turkey, sitting around the table with whinging relatives who don’t really appreciate all the effort you’ve gone to. Who then take naps while you clear the dishes and make copious cups of tea and coffee.

It’s nothing short of chaotic but for me, it’s what Christmas is really all about.

A couple of years later we tried to have Christmas away again, this time in New York, but short of being in a totally different location the same feelings of pining for the traditions came flooding back.

So I’ve decided that to avoid missing out on the stuff that I always thought I’d like to miss out on, I’ll be staying at home for Christmas Day and shooting off somewhere on Boxing Day. To me, that really will be the best of both worlds.